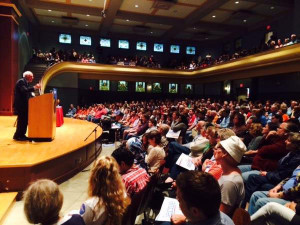 Vermont Senator and Democratic presidential candidate Bernie Sanders, the longest-serving independent in congress, drew a crowd of nearly 800 tonight in Des Moines as he laid out his vision for the country.

“Whoa, got a lot of people here tonight,” Sanders said when he stepped behind the microphone, drawing cheers from the crowd. “You know sometimes our campaign has been referred to as a fringe campaign. Well, if this is fringe, I would hate to see mainstream.”

Sanders railed against the “billionaire class”, called for gradually raising the minimum wage to 15 dollars and drew loud cheers as he spoke about the need for pay equity for women. Sanders, who supports a carbon tax, got a standing ovation when he spoke of climate change and called for ending dependence on fossil fuels.

“We have a moral responsibility to stand up now and say, ‘Enough is enough. We are going to transform our energy system and the planet we leave will be habitable,'” Sanders said.

The crowd also responded loudly as Sanders railed against the North American Trade Agreement and celebrated the defeat of trade legislation.

“The House of Representatives this morning put a real kibosh on the Trans Pacific Partnership,” Sanders said, to cheers. “…Today, the good side won.”

Sanders invited three students to speak briefly about their college debt and many in the crowd gasped as an Iowa State University student explained how high her debt would be and how much interest she was being charged on the loans.

Sanders will officially open his campaign office in Des Moines on Saturday, then make stops in five other Iowa cities over the weekend.