You are here: Home / News / Clinton: ‘No president would be a tougher negotiator’ on trade deals 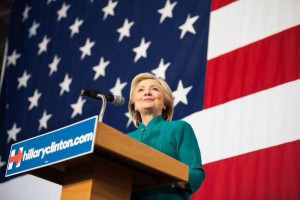 Democratic presidential candidate Hillary Clinton dove into the debate over trade policy today, distancing herself from President Obama in the process.

Clinton held her first public rally in Iowa since formally entering the 2016 presidential race and she used the appearance to side with House Democrats who dealt a setback to President Obama’s trade agenda last Friday.

“No president would be a tougher negotiator on behalf of American workers either with our trading partners or Republicans on Capitol Hill than I would be,” Clinton said, to cheers.

About an hour later, Clinton said during an interview with Radio Iowa that trade deals are “fraught with all sorts of problems.”

“I am someone who has seen the pluses and the minuses of trade agreements,” Clinton told Radio Iowa. “Our goals should always be to make as many winners as possible out of our agreements and to make sure we protect American workers and get rising wages, more jobs and that it’s good for our national security. I think that in today’s world it is a very hard road to manage any trade agreement, especially with so many parties.”

The Trans Pacific Partnership with 11 other countries could be one of Obama’s signature achievements. The failed vote in the House last Friday was on trade promotion authority for President Obama. It means congress could not seek changes in trade deals like the TPP, but would either have to approve or reject the deal in total. Clinton suggested Obama needs to try to make lemonade out of lemons and “convince” Democratic allies “like Nancy Pelosi” that he will get concessions from the other Trans Pacific countries.

“To go back to the other countries and say: ‘You want a lot of out of this. I need more,'” Clinton said. “‘Our market is still the biggest, most consumer-friendly in the world, but I can’t go forward unless I get X, Y and Z from you.'”

Clinton had been mum on the issue for weeks, but her Democratic competitors have been railing against Obama’s pending trade deal during Iowa campaign stops. Former Maryland Governor Martin O’Malley got applause for his stand during an appearance in Marshalltown on Thursday afternoon.

And Vermont Senator Bernie Sanders, an independent who has decided to enter the Democratic race and challenge Clinton, told a crowd in Des Moines on Friday night that it’s time to put the “kibosh” on the Trans Pacific Partnership.

“Our trade policies over the last 40 years — NAFTA, CAFTA, permanent normal trade relations with China — have been a disaster,” Sanders said, to cheers.

“I kind of think people would prefer to hear what your position is — Are you for it or against it? — rather than passing the buck and saying, ‘Well, in a sense, I have no position,'” Sanders told reporters in Indianola. “That is not leadership.”

Clinton earlier this afternoon said she has a “pretty good idea” about the “tests” any trade agreement must meet.

“To make sure we get the best, strongest deal possible and if we don’t get it, there should be no deal,” Clinton said.

Both Sanders and O’Malley, along with some of the Iowa Democrats who’ve been turning out for their events, have been questioning Clinton’s commitment to Wall Street reform as well. Clinton told Radio Iowa she needs “to do a better job of explaining” her record when she served in the U.S. Senate.

“I don’t blame anybody else for not remembering what I was saying and calling for,” Clinton said. “…I do think that we have to draw some lines and be more specific about what we expect from the biggest banks and the financial industry and the like.”

Clinton indicated that in the coming weeks she will be “rolling out” specific proposals that will address the “risky” behavior of some on Wall Street.

Joyce Naffier of Ankeny said she “can think of a whole lot of bankers who should be in jail” — and she believes Sanders, not Clinton, will put them there.

“I like his passion. Everything he says, I say, “Yea, you’re right. It’s about time we were hearing this,'” Naffier said during an interview Friday night before Sanders’ rally in Des Moines. “More than hearing it, I want something done.”

Kim Martin of Des Moines — one of the people in Clinton’s crowd today — said Clinton has the “chutzpah” to get things done.

Clinton drew one of her loudest responses at her Des Moines rally by focusing on her gender.

“I may not be the youngest candidate in this race, but with your help I will be the youngest woman president in the history of the United States,” Clinton said, to prolonged cheers.

That’s a departure from Clinton’s approach in her 2008 campaign. Back then Clinton told audiences she wasn’t running because she was a woman, but because she felt she was best prepared to be president.

“There were very considerable doubts in the minds of people about could a woman be president, could a woman be commander in chief and I had to establish my bona fides in order to be seen and taken seriously as a potential candidate,” Clinton told Radio Iowa today. “The country has changed.”

According to Clinton that’s due to popular culture, as women have been cast in the role of president and vice president in television shows and movies.

“And so there is an eagerness that I find now in crowds here in Iowa and elsewhere not just to support me because they think I’d be a good president because of X, Y or Z, whatever the specific reason would be, but because we would shatter that highest and hardest glass ceiling,” Clinton said.

As for those who suggest there’s “Clinton fatigue” in the country, Clinton countered that she senses “energy” moving in her direction.

“I think a lot of the political heat that is directed at me is kind of a strange form of respect and even flattery, you know, because if they weren’t so concerned about me, they’d leave me alone,” Clinton said, laughing. “But they get up every day, you know, worried that the case I’m making will break through.”

Clinton spoke for more than 20 minutes with Radio Iowa, answering a range of questions on policy and the conduct of her campaign. Clinton addressed her husband’s criticism of the Iowa Caucuses after she finished third here in 2008. Bill Clinton called the Caucuses undemocratic — but today Hillary Clinton praised changes the Iowa Democratic Party has made that may allow shift workers and soldiers on active to participate in the February 1st Caucuses.

“We’ve got a great team here in Iowa,” Clinton said. “We have people committed now in every precinct in the state and we’re going to out-organize and out-compete and out-perform wherever we can to get as many people to support me in the Caucuses and play by the rules of the Caucuses and do our best to be successful.” 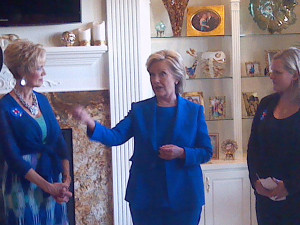 Clinton’s 2016 campaign entered a new phase this weekend with the first public rallies since she announced her candidacy in an online video two months ago. Clinton appeared at a house party in Burlington this evening. On Saturday, she was in Sioux City for a house party that was simulcast to similar events throughout the country.