You are here: Home / News / Clinton tells Radio Iowa trade deals are ‘fraught with all sorts of problems’ (AUDIO) 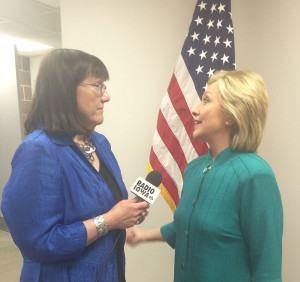 The conversation began with a discussion about trade and the Trans Pacific Partnership. What follows is the sequence of questions and some of her responses.

Did President Obama mishandled it in his negotiations with Republicans?

“Any trade agreement is going to be fraught with all sorts of problems,” Clinton said. “I’ve voted for them and I’ve voted against them and I voted against Fast Track in the Bush Administration, so I am someone who has seen the pluses and the minuses of trade agreements. Our goals should always be to make as many winners as possible…I think that in today’s world it is a very hard road to manage any trade agreement, especially with so many parties…What I have advised…is that the president take the opportunity offered by staunch allies like Nancy Pelosi…and try to figure out how to use this as leverage, to go back to the other countries and say: ‘You want a lot out of this. I need more. Our market is still the biggest, most consumer friendly in the world, but I can’t go forward unless I get X, Y and Z from you and I think that there is at least a potential opportunity for him to take this moment and as I said kind turn lemons into lemonade…Convince people who are convincible…that you have answered some of the legitimate questions that have been raised.”

Is it time for a rethink, time to send U.S. troops to do combat-type maneuvers in Iraq?

“I do not believe that U.S. troops should be on the ground in Iraq doing combat,” Clinton said. “I think what the president is trying to accomplish is using the unique skills that the American military has in intelligence, surveillance, training to buttress the efforts of the Iraqis themselves and I have supported the president’s approach to dealing with this very serious threat.”

Your Republican friends have already cited (universal preschool) as one example of a big government approach as opposed to their view. What would you say to that criticism?

“I think investing in early childhood and pre-kindergarten is good for our economy. It’s good for our democracy. I make absolutely no apologies for believing that,” Clinton said. “I also notice that many Republican governors are beginning to institute preschool programs.”

In your husband’s administration you had a significant policy role. In a Hillary Clinton administration, what role would Bill Clinton play in regards to policy?

In 2008, members of the Clinton team, including Bill Clinton, had some concerns about the Caucus process…Are you comfortable with the process…and how does this feel different than it did eight years ago?

“I am very committed to competing in the Caucus system and I do think that the Democratic Party in Iowa has made some changes that will provide some greater opportunity for people who wish to express themselves in the Caucuses to be heard,” Clinton said.

There are sort of two Americas…it seems as if in one America you’re well respected, you’re admired. In the other America, you’re hated and you’re vilified. How in presenting what many are describing as a progressive agenda do you then govern for the two Americas as president when maybe the proposals you’re presenting don’t appeal to that sector of the country?

“I will work with anybody anywhere anytime to find common ground,” Clinton said. “…I think a lot of the political heat that is directed at me is kind of a strange form of respect and even flattery because if they weren’t so concerned about me, they’d leave me alone, but they get up every day you know worried that the case I’m making will break through.”

In 2007 when I covered you, you to paraphrase said I’m not running for president because I’m a woman but because I’m the most qualified, Now you’re talking about breaking the glass ceiling. Why the change?

“There is an eagerness that I find now in crowds here in Iowa and elsewhere, not just to support me because they’d think I’d be a good president because of X, Y, or Z…but because we would shatter that highest and hardest glass ceiling,” Clinton said.

One of the things I hear from Iowa Democrats at (Sanders & O’Malley) events is that they’re unsure about your commitment to Wall Street reform or going after the big banks. How do you reassure skeptics?

“I will have to do a better job of explaining my record,” Clinton said.

Some of them use the phrase Clinton fatigue as well. Is that something that can be cured?

“When I ran for the Senate the first time in New York I heard all of this,” Clinton said. “…I’m going to work hard to earn every vote and then the voters will decide. I understand what my opponents in both the Democratic Party and Republican Party are trying to do. I don’t blame them. That’s their campaign, but I’m going to set forth what I believe, what I think will work…and then people will make their own decisions.”

Your mother was here in December before the Caucuses. You talked in your speech yesterday about going home from work and talking about your travails with your mother. I’m sure the Caucuses came up. What was her advice to you?

“She didn’t immerse herself in the political details. She was there to support me and to be there in that wonderful way she had of kind of reminding me of what’s important in life,” Clinton said.

Clinton did two interviews this afternoon with Iowa-based media, one with Jennifer Jacobs of The Des Moines Register and one with Radio Iowa’s O. Kay Henderson.