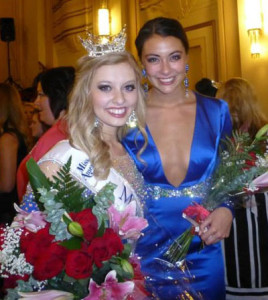 A new Miss Iowa was crowned in Davenport over the weekend. Miss Clinton County Taylor Wiebers is the new state titleholder and she’ll represent Iowa at the Miss America Pageant in Atlantic City this fall.

The 21-year-old Wiebers says it was the thrill of a lifetime when her name was called and there was no back-stabbing at the Miss Iowa Pageant.

“We all get along so well,” Wiebers says. “There’s no catty girls, there’s no girl fights or drama, it’s so supportive. I had 16 Miss (Iowa) contestants and 9 Teen contestants just in uproar of excitement and congratulations.” She says it all hasn’t sunk in quite yet and she keeps looking at the Miss Iowa crown.

“I haven’t let it out of my sight since they put it on my head,” Wiebers says, laughing. A previous Miss Iowa told the contestants not to be discouraged if they didn’t win because the judges were looking for a certain type of woman, making the comparison to candy bars — the judges might want a Twix and you’re a Snickers.

“I just happened to be the candy bar they were looking for,” she says. “I went into finals night being ready to leave it all on the stage. I knew I wanted it and that if it was meant to be, that it would be. I just left it all up to fate and it all worked out.” Wiebers has attended both the University of Iowa and Clinton Community College. She competed in the Miss Iowa pageant last year as Miss Johnson County and was third runner-up. Later in the year, she was named Miss Clinton County which she says made all the difference.

Her platform is to raise awareness about childhood cancers. Wiebers says she’ll be non-stop busy leading up the Miss America Pageant to be held in September in Atlantic City, New Jersey.