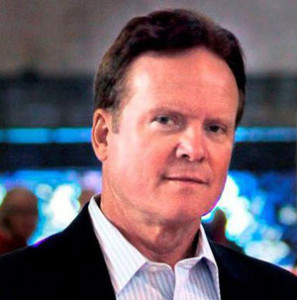 Potential presidential candidate Jim Webb, a Democrat, says has been an advocate for strengthening U.S. ties with East Asian countries, but Webb says he “has a problem” with the Trans Pacific Partnership.

“I think that the administration owes us a transparent look at what the agreement actually looks like and I would oppose ‘fast track’ at this point, unless this agreement were made more visible,” Webb says.

Webb, a one-term senator for the state of Virginia, says “at various points” in his senate career he voted to extend “fast track” authority to the president, to speed congressional approval, but he says the Obama Administration has been too “opaque” about the negotiations among the 12 countries involved in the potential Trans Pacific Partnership.

“When you’re trying to put together an agreement where you have such different systems as, say, Japan and Vietnam — Japan, a very mature economy, very high income (and) Vietnam, an emerging economy where the average worker makes about $3 a day — when you’re trying to put them under the same document, I think we need to see how that is working,” Webb says.

Webb says it’s a “false argument” to suggest the Trans Pacific Partnership would be an important step to contain China’s aggression, since the U.S. wants China’s economy “to be fair and transparent” and China might become a member of the trade group in the future. Webb argues there’s not enough discussion about the “expansionist nature” of China, however, and the need for the U.S. to “confront” China over its attempt to claim vast swaths of territory in the South China Sea.

Webb is in the midst of a three-day visit to Iowa and he’ll make a decision about running for president “in a couple of weeks.”