You are here: Home / Military / Jindal says if U.S. military is weak, it ‘only provokes evil’ 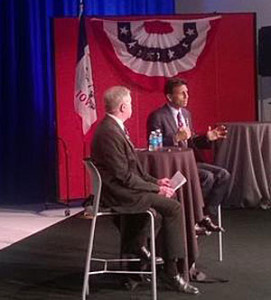 Potential Republican presidential candidate Bobby Jindal on Monday said the best way to avoid war is to prepare for it.

“I never want America’s military in a fair fight. Any potential fight, I want our military to be able to dominate,” Jindal said in Cedar Falls, Iowa. “…Weakness only provokes evil.”

Jindal, the governor of Louisiana, said if Russian president Vladimir Putin “truly feared” the U.S., for example, Russia would not have advanced on Ukraine.

“Make no mistake about it, if Reagan were in the White House today, Putin would not be in the Ukraine,” Jindal said. “He looks over to the White House, he doesn’t fear the consequences. From his side, this has been a successful incursion. He hasn’t paid a real price for it from his perspective.”

Jindal was in Cedar Falls yesterday to take part in a forum on national security.

“Leading from behind hasn’t worked. What does work is peace through strength,” Jindal said. “We need to get back to a foreign policy where our friends trust us (and) our enemies fear and respect us.”

While Jindal describes himself as an advocate of “shrinking the size of the federal government,” he said the next president must significantly boost spending on the U.S. military.

“We’re going to have fewer troops, fewer planes, fewer ships, older equipment than we’ve had in decades,” Jindal said. “We’re spending more on our federal government than we’ve done since WWII and yet we’re spending less on our military as a share of our economy and that’s just wrong.”

Jindal is the second GOP candidate to appear at an Americans for Peace, Prosperity and Security forum in Iowa. The group is holding similar events in the early-voting states of New Hampshire and South Carolina as well to focus attention on national security issues.

Jindal is expected to formally announce he’s running for president next week.