You are here: Home / News / ‘This has been a really wild day,’ candidate Trump tells Des Moines audience 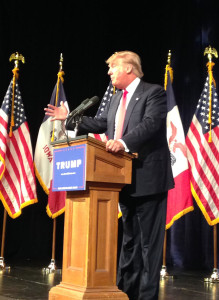 “The Donald” became an official Republican presidential candidate this morning and he attracted a crowd of more than 300 to his opening night in Des Moines.

“My whole theme is: Make America Great Again!” Donald Trump said as he stood in front of a huge blue panel with those words blaring at the top in white type. “It’s very simple. Make America great.”

Before he arrived, Donald Trump’s Iowa campaign manager told the crowd the businessman “quite literally” owns the copyright to that slogan.

The stage for Trump? The historic Hoyt Sherman Auditorium in Des Moines. The National Anthem? It was sung by Miss Iowa Taylor Wiebers. The warm up act? Ten-year-old Shay Doyle of Waverly — a sort of mini-Donald. 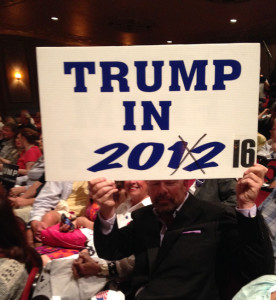 “I am very excited to hear that Mr. Trump is running for president. Can you guys believe that or what?” Doyle asked the crowd and they cheered. “…I have eight years before I can vote, so I’m relying on all of you to vote for Mr. Trump for me.”

A holocaust survivor was honored next, then it was David McNeer turn. He owns a printing company in Newton and he got a call five years ago from Trump after Trump watched a story about Newton on “60 Minutes”. “Within a week, we had appointments at the Trump hotel in Chicago,” McNeer said. “…Mr. Trump also asked for me to remember that if he did run for president that he would love us to do some signs.”

Those signs, bumper stickers and campaign pins were snapped up by the crowd, who cheered Trump’s entry into the Republican presidential race. “This has been a really wild day,” Trump said once he arrived on stage. They cheered Trump’s solution to what he called the “disaster” that is Iraq and defeating Islamic militants there.

“ISIS has the oil and ISIS is rich and what we should do right now is go blast the hell out of that oil,” Trump said, to whoops and applause. “That’s what we should do.” They laughed when Trump talked about watching Jeb Bush’s campaign announcement speech on Monday. “He can’t even put on a tie and jacket. He’s running for president. I don’t know, maybe he knows something that I don’t know. Maybe I should take it off because I want to be one of everybody. You know what? You’re running for president, maybe you put on a tie, maybe you put on a tie,” Trump said, as the crowd cheered.

Trump criticized Florida Senator Marco Rubio, another GOP presidential candidate, for backing an immigration reform effort. And Trump questioned why competitors Carly Fiorina and Rick Santorum were even in the race after their unsuccessful campaigns for seats in the U.S. Senate. “She lost. He lost…They lose by these massive margins and then they say, ‘Oh, that’s O.K. Then I’ll run for president,'” Trump said. “I say: What’s going on here? It’s not supposed to work that way.” Trump re-worked his “announcement” event in Des Moines into a “town hall” by taking questions for about 15 minutes. “They can be vicious, violent. You can do anything, say whatever the hell you want,” Trump told the crowd. “Let’s go.”

He was asked about abortion. He’s prolife. There was a question about the news media. He really doesn’t like columnist George Will these days. The last question was about Hillary Clinton. “There’s nobody that’s going to beat her, except Donald Trump,” Trump said, then he walked out through the crowd, shaking hands and posing for pictures before leaving in his limo, headed back to the airport.

(A previous version of this article incorrectly indicated Miss Iowa Taylor Wiebers would compete at Trump’s Miss USA pageant. She will be competing in the Miss America pageant.)