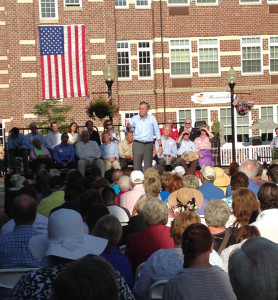 Bush stopped at a Casey’s in Sigourney to shake hands with customers, he spoke at a backyard gathering in the “other” Washington — Washington, Iowa — and he held a town hall meeting that drew hundreds of people to an outdoor plaza in Pella in the late afternoon.

“This is day three of my candidacy and I can’t think of a better place to be than in Pella,” Bush to start his remarks. “It is a beautiful city. You all should be very proud of it and people were complaining that this was humid. You obviously are not from south Florida. This is like Arizona to me.”

Bush’s campaign team handed out hundreds of Popsicles as Bush wrapped up a brief speech and then took questions from the crowd.

“Thanks for the Popsicles today, governor. That was a nice tough on a hot day,” one man said before he asked his question.

As the crowd applauded in agreement, Bush quipped: “Here to serve,” and drew laughter. 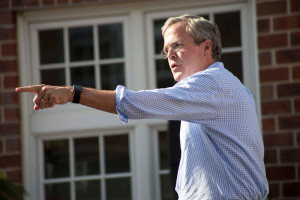 Bush spent part of his time talking about serving as governor of a “purple state” where Democrats held a voter registration edge over Republicans. He touted tax cuts as a means of boosting the economy. He promised to rebuild the military and fix the Veterans Administration if he’s elected. He talked about giving undocumented immigrants a pathway to “earned legal status.”

“And this apparently is controversial, so here goes — I’ll subject myself to a little bit of abuse, but I don’t think 11 million people living in the shadows is appropriate in this great country,” Bush said, to applause and a few cheers. “I think what we ought to do is stop ignoring the problem.”

Bush formally kicked off his campaign for the White House with a rally in Miami on Monday. A man in the Pella, Iowa, audience asked Bush why his campaign posters say, “Jeb!” rather than “Bush”.

Bush told the crowd he plans to “show his heart” to voters, to “connect on a human level.”

“You have to have a message that draws people back to the conservative cause,” Bush said. “You have to go campaign in places where they haven’t seen a Republican in a long, long while. Rather than just tearing down the country and tearing down people that don’t agree with you.”

Brenda Kamish and Connie Nedved of Moravia went to Pella to shop — and wound up at the Bush event. Kamish gave her contact information to the Bush campaign team afterwards.

“I liked that he wasn’t just trying to blame the Democrats, that he was actually saying what we can do and I felt like it wasn’t just a flowery speech. He was saying words that ring true,” Nedved says. “…And I believed him.”

About a hundred people were in the yard of a home in Washington, Iowa, this morning to see and hear Bush. During a question-and-answer session with reporters afterwards, Bush was asked about the pope’s statements about climate change.

“I believe that there are technological solutions for just about everything and I’m sure there’s one for this as well,” Bush said. “So I respect the pope. I think he’s an incredible leader, but I think it’s better to solve this problem in the political realm, but I’m going to read what he says, of course. I’m a Catholic and I’ve got to follow the teachings of the church.”

But Bush told reporters he goes to church to “have my faith nourished” and “challenged.”

“I don’t go to mass for economic policy or for things in politics,” Bush said. “I’ve got enough people helping me along the way with that.”

Bush said there could be a federal role in providing incentives for technology that addresses some of the problems caused by climate change, but it should be done in a way that ensures there aren’t job losses or a hit to the U.S. economy. Bush has begun to talk about aiming, as president, for four percent economic growth in the country, but he said there is “no way” to achieve that without changing the current federal tax and regulatory system.

“We’ve allowed since 1987 a tax code to be rife with all sorts of expenditures, basically, $1.2 trillion of annual expenditures that are in the form of deductions and tax credits, creating barriers of the next generation of job creators,” Bush said, “to protect the incumbents.”

Bush said he plans to unveil “aspirational goals” as a candidate and convince voters he has the “leadership skills” to make things happen.