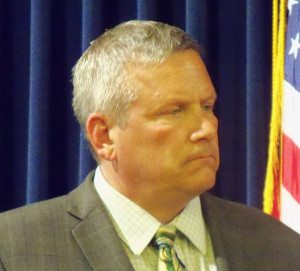 Northey told the group of about 175 people that it’s vital for a community to pull together during difficult times like these. “It’s important to do what you’re doing tonight,” Northey says. “That’s put your arms around the folks that went through this, let them know how much you care. Let them know there’s not a lot that, as Pastor said, that you can do for them other than to let them know that you care.”

Of the 77 confirmed cases of bird flu in Iowa poultry operations, 14 of them were in Buena Vista County. More than 31-million chickens and turkeys have been euthanized in Iowa in recent months due to the bird flu epidemic. The USDA provides an indemnity for euthanized birds and will cover some costs of disposal, but the federal government doesn’t give aid for loss of income. Some called the 2014-2015 Avian Flu Outbreak the biggest animal health emergency in U.S. history.

Des Moines Water Works says it’s causing an excessive financial burden on the city to remove nitrates from the water supply. Northey says while he doubts a lawsuit is the answer, he also says the agricultural community needs to find a long-term solution. “Society is going to demand that of us,” Northey says. “We want those nutrients to stay there. We’re motivated by it. We’re going to learn things that are going to make us better producers as we learn how that nitrogen mineralizes in the soil.”

According to the Des Moines Water Work’s petition, in the summer of 2013, fall of 2014 and winter of 2015, nitrate levels in the Raccoon River reached record peaks. Bill Stowe, CEO and general manager of Des Moines Water Works, alleges the drainage districts in the three northwest Iowa counties are violating the federal Clean Water Act. Stowe says the system to remove the nitrates costs $7,000 per day to operate.