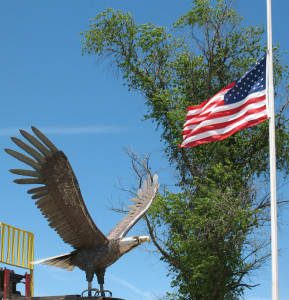 A unique sculpture created by the owner of an iron works company in Cass County will be featured during the parade for the Lewis Day Festival later this month and in an international art competition.

Duane Weirich, of Weirich Welding, in Lewis, says he started working on a steel sculpture of an eagle in January. He later learned of a contest that’s held in Grand Rapids Michigan called “Art Prize Seven,” which runs from September 23rd through October 11th.

Weirich entered his project April 20th, and has a venue lined-up to display the piece, which is made entirely out of scrap iron. “It is 12 feet across the top of the wings and about eight foot tall the way it is. It’s probably about 400 pounds,” Weirich says. The base alone weighs 22-hundred pounds.

The project is called “America, Come Together” and the eagle will sit on the base that is a globe. “The eagle is actually going to be clamped to the United States holding it up, it’s going to have the theme, the eagle is saying ‘I need help’…I think it will go over big,” Weirich says. Weirich says he will take the piece to Michigan this fall for the Art Prize contest. “It’s the world’s largest art competition, last year there were 15-hundred entries from 46 countries and 41 from the United States. It’s just, it’s huge,” Weirich says.

Weirich says he has about 200 hours into the project so far. The eagle has 2,000 individual pieces of metal that comprise the feathers. He hand cut all the feathers and stamped them to get some texture. Weirich says he will travel with the eagle this fall to Michigan for the contest Art Prize contest.

The awards are based on “People’s Choice, and by professional judges. There are cash prizes for the top ten finishers. When the contest is over, the eagle will be sold. Weirich says he already has two people interested in purchasing it. The parade in which the eagle will be featured is June 27th in Lewis. It is military-themed, and features members of last year’s Cass County Honor Flight, along with many other area veterans.

Grand Marshals for the parade are Dula Thompson and John Robinson, two of the oldest residents of Cass County. A ceremony dedicating the Cass County Freedom Rock at Pioneer Park gets underway at 4 p.m. The Rock was painted by Ray “Bubba Sorensen,” of Greenfield. A salute to Veterans fireworks display rounds out the activities, at dusk.