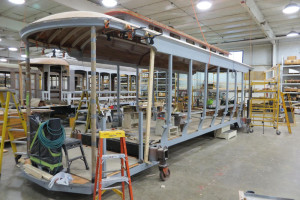 A former National Guard Armory on the edge of Ida Grove is now resurrecting history. Wood workers are trimming, routing and varnishing rafters and decorative trim for an old fashioned trolley car, the kind of transportation that used to be common. Grant Godbersen is vice president of Gomaco Trolley Company.

“Truly (we) have been a country that hasn’t had these trolleys running in service for well over 60 years. The buses generally started taking over more and more of the routes in the cities and the trolleys were phased out,” Godbersen says. Gomaco is short for Godbersen Manufacturing Company, an international giant best known for building other things; from bridges to paving equipment.

One of the family patriarchs was obsessed with restoring cars; one thing led to another, and they won their first bid to refurbish trolley cars in 1982. They’ve built about 40 trolleys, including one in Mount Pleasant that has carried many thousands of Iowans during the Old Threshers Reunion. John Kallin is the company sales manager. “Restoring a trolley car is very labor intensive because you dismantle the car, you take all the old stuff off and then at some point you finally get to where you now start putting it all back together,” Kallin explains.

Depending on the project design, a trolley can cost anywhere from a 500 million dollars to nearly 2 million. Contemporary trolleys have the advantage of current innovation and technology, like Gomaco’s version of a Prius trolley; a renovated car from Australia that runs on battery or electric power. Their latest replica will be shipped to Taiwan — the company’s first overseas export. It will move Chinese passengers between an amusement park and a shopping mall.

“That car is 100 percent battery,” Godbersen says. “They ordered their car with extra batteries to get longer run time. They’re hoping to be able to start in the morning and run pretty much for 12 hours before they need to recharge again.” The company’s staff of 13 makes the brass components in the onsite foundry — including the shiny overhead grab-rails, the whistle and conductor’s bell.

Gomaco does not compete in mass transit, or manufacture buses that look like trolleys. Nothing on rubber tires, according to Grant Godbersen, just vintage style cars that ride the rails. A number of cities are bringing them back to revitalize their downtowns, but he’s not sure that will catch on in Iowa.

“One of the big problems the Iowa cities are going to have is it requires so much federal funding to do these projects, the infrastructure work, and the laying of tracks, and moving the utility lines,” Godbersen explains. “A lot of these projects get into the hundred to 200 million dollar range there .”

Gomaco is also rehabilitating a vintage rail car for a tourist train in the Black Hills, which started out as a pile of rotting boards and rusted parts. Only a few companies specialize in this business, which survives in part on nostalgia, a half century after most trolley car tracks were ripped out and forgotten.

Thanks to Rick Frederickson Iowa Public Radio for the story and photo.