You are here: Home / Education / Couple gives record gift to Archdiocese of Dubuque 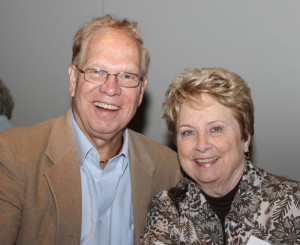 Five organizations in the Archdiocese of Dubuque will benefit from a record-breaking gift of $4.5 million. Mike Cambridge and his wife Jo made the donation.

Jeff Henderson, the director of development for the Dubuque Archdiocese, says he was very surprised when he learned of the gift and got very excited when they told him that they wanted to do.

The gift will go to the parishes of St. Jude and St. Patrick in Cedar Rapids, as well as Loras College in Dubuque, Mount Mercy University in Cedar Rapids, which will each receive one million dollars.

Cedar Rapids Xavier High School will receive $500,000. “I would say it’s probably unprecedented for a gift of that magnitude to go to five organizations and entities within the archdiocese, we are very pleased with that. That in an of itself makes it unusual,” Henderson says. He says the couple is giving more than money, they are also using the gift as a challenge to others.

“I think they are looking at this as a gift that they are hoping that others will one day consider for themselves to be able to match or to do better or to do whatever they can to support it,” Henderson says. He says the gift goes beyond the dollar amount. “A lot of this, nearly half of it is going to go directly in the form of scholarship to deserving and needy families to attend college or Catholic school,” Henderson says. “And I think that also adds to the uniqueness of this.”

The couple both graduated from St. Patrick High School in Cedar Rapids in 1959 and have been married for 53 years. Mike Cambridge is 75 and says he spent a lot of time investing in the stock market over the years and decided he wanted to give back to the church. Mike worked in the human resources industry in Cedar Rapids for 13 years before he and Jo started Cambridge Staffing/Tempositions in 1979 with offices in Davenport, Iowa City, Cedar Falls, Dubuque and Cedar Rapids.