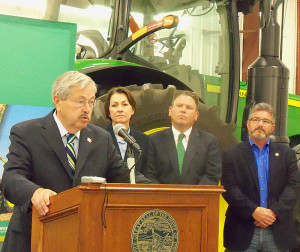 Governor Terry Branstad traveled to an ag equipment dealership in Perry today to sign the “Connect Every Acre” high-speed broadband bill into law. The governor signed the bill at a table set up in a machine shed which housed several large pieces of John Deere Ag equipment.

“Indeed the legislation will foster broadband expansion across Iowa, and assist in building Iowa for the future,” Branstad says. He praised the bipartisan support of the bill.

Lieutenant governor Kim Reynolds joined the governor at VanWall equipment for the signing. “The Connect Every Acre bill signed into law today will provide for the coordination and facilitation of broadband access in targeted services areas throughout the state,” Reynolds says. “It establishes a grant program to award grants to communication service providers.”

John Teeple, the director of John Deere’s Intelligent Solutions Group, was also on hand for the signing. “Iowa’s farms, schools and communities will be able to connect to the internet with higher capacity and speeds — enhancing distance learning opportunities and positioning rural communities to better compete in the digital economy,” Teeple says.

Teeple says the modern technology in farm equipment requires high-speed internet. “Most of the machines on display here today are equipped with advanced technologies, like cellular modems, which are wirelessly connecting them in the cab to precision farm data — such as application rates — as well as to other machine, economic, market and weather data,” Teeple says.

He was asked if the problem is lack of internet access, or download speeds, and replied that both can be issues. “We have machines today that in the field today equipped with 2-G and 3-G modems as an example, and there are definitely places in the state where there is no coverage,” Teeple explains, “And there are places where there is minimal or spotty coverage at best.” 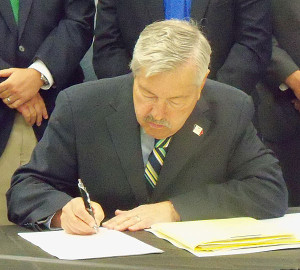 The legislation creates a property tax exemption of 100 percent for 10 years for installations of equipment in a targeted service area and sets up a framework for a grants program for the installation of broadband service in those targeted areas. The one thing that doesn’t come with the bill is state funding, but Governor Branstad is hopeful they can win grants to get things going.

Branstad says they will look at all different sources for possible grants. “And I think there could be federal dollars available from the U.S.D.A. and other sources. We are also going to look to private sector potential sources and what the state might be able to do with different types of mechanisms,” according to Branstad.

The governor pushed for the legislation in 2014, but it failed to pass, and he says he is pleased that it passed this year. He says now that it is passed, he will look at asking the legislature for money again in the next session.