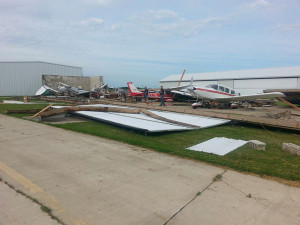 A hanger and 5 planes were damaged by a storm at the Sheldon Airport.

Straight-line winds of 95 miles an hour caused a hangar to collapse just before 5:30 a.m. according to Kari Vust who works at Midwest Flying Service, which is based at the airport.

“It had five aircraft in it — destroyed,” Vust says.

The estimated half a million dollars in losses will be covered by insurance, according to Vust.

“The city owns the hangars and they have their insurance and then the individual hangars have theirs,” she says. On-line records indicate 26 planes are stored at Sheldon’s airport. 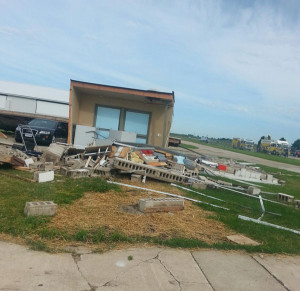 Twenty are single-engine planes. One is a jet. No people were injured at the airport in this morning’s storm. Tree damage was reported in Marcus and Le Mars.