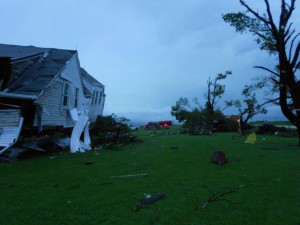 This home in Fayette County was blown off its foundation.

Many Iowans have spent the day cleaning up storm damage after severe weather moved across the state this morning.

An intense line of thunderstorms left at least 24,000 homes and businesses without electricity across the state, as high winds toppled trees and downed power lines in multiple areas.

Some locations in northeast Iowa reported two-inch rainfall in 30 minutes, which caused some localized flooding. In Allamakee and Winneshiek Counties, authorities say many roads were damaged by the terrential rain. 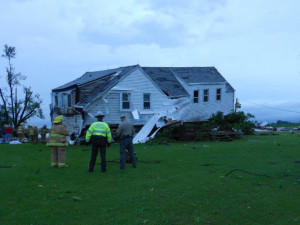 Further north, near Maynard, a rural Fayette County couple had to be rescued for their home after it was twisted from its foundation. At least one person is hospitalized with non-life-threatening injuries. Elsewhere in northeast Iowa, the storm flattened an Amish grocery store near the Clayton County community of Garber and tore the roof of a school in the Dubuque County town of Holy Cross.

Flood warnings are currently posted for the Cedar River at Charles City and the Iowa River at Marengo through Wednesday evening. Minor flooding is expected along both rivers.