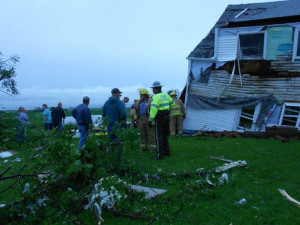 Wind gusts approaching 60 miles an hour blasted through parts of north-central Iowa’s Wright County this morning. A tornado warning was issued for Humboldt and Wright counties though it’s unclear if any twisters touched down. Stan Watne is a Wright County Supervisor from rural Galt and says there are numerous power outages and damage reports.

In addition to several large trees and power lines downed, he says his brother Tom has a limb through his living room window. No injuries are reported. The Wright County Courthouse in Clarion is closed until mid-morning due to storm damage. Trees and power lines are also down in parts of Black Hawk County, including in the cities of Waterloo, Cedar Falls and Evansdale.