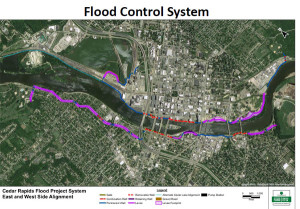 Information from the City of Cedar Rapids explaining the flood control system.

The estimated cost of the flood control system for Cedar Rapids is $600 million and it could be 20 years before it’s done. It will be the largest capital improvement project in the city’s history. More than half of the cost is covered by already-acquired state and federal grants.

Cedar Rapids was inundated with flood waters in June of 2008 and city leaders began drafting this plan a few months later. A third of the estimated cost of the project will be spent designing the 6.5 mile system of flood walls, flood gates and earthen levees and then buying the property for it. The remaining two-thirds will be the cost of the actual construction.

The work will begin in the “New Bohemia” and “Czech Village” neighborhoods of Cedar Rapids.