You are here: Home / Business / Study shows millions of dollars of impact from craft beer in Iowa 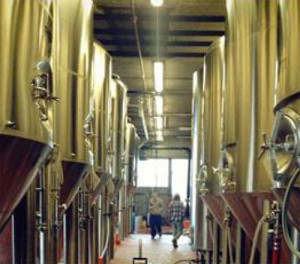 Inside an Iowa brewery.

A study by the Iowa Wine and Beer Promotion Board finds the growth of the craft beer industry has done more than just increase the selection for one of the state’s favorite adult beverages.

Board member Megan McKay says the study shows an increase in dollars comes along with the cold mugs of brew.

“Overall economic impact of the Iowa brewing industry is about $110 million to the state of Iowa,” McKay says. “We create about 1,500 jobs each year — and that’s in the breweries as well as in brew pubs and restaurants and then the kind of add-on jobs for distributors and that sort of thing.”

McKay owns the Peace Tree Brewing Company in Knoxville, and says this is the first look at the impact of the craft beer industry. “It’s not a huge industry in the state, but its also one that has been growing. And I think there are some add-ons as far as travel and tourism that can go along with that as well. We also showed that it increased personal income by about 42 million (dollars) for Iowans,” McKay says. 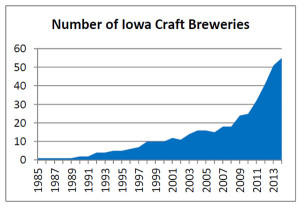 Iowa’s first craft brewery opened in Amana in 1985 and from then through 2014, 69 breweries and brewpubs opened and 15 closed — leaving 54 in operation in 29 Iowa counties.

“I think the really surprising thing is only about one percent of the beer sold in Iowa is made in Iowa breweries. Nationally that’s more like seven-and-a-half to eight percent,” McKay explains. “And so, even though we are getting a lot more breweries in the state, its certainly not overloaded yet. We are not at the market share where we are nationally, so I think it shows that there’s a lot of opportunities.”

There also appears to be plenty of opportunity to get more Iowans who can legally down a cold mug to drink the in-state beers. “Average consumption of beer per-capita is 33 gallons a year for the state of Iowa, but we only drink about .41 gallons of craft beer per capita. Whereas nationally that’s about 1.7,” according to McKay. She says part of the lower volume of in-state beer consumption is the nature of the state, as she says Iowans tend to stick with the brand they like.

McKay says a change in law helped in-state beer brewers offer more selection and compete better. “Until 2010, Iowa breweries couldn’t brew anything over 6.25 percent (alcohol) by volume,” McKay says. “And so it really limited the styles that we could make. We couldn’t make a lot of the interesting IPAs or Belgin styles or imperials, the bigger stouts that some of the out-of-state breweries were making that gathered some excitement.”

Iowa craft beer production in 2014 was 40,786 barrels with 82 percent sold in-state, and the rest sold outside Iowa. The report projects a 28 percent increase in the number of facilities producing craft beers this year. McKay says that fits with what she’s seeing in the industry.

“I’ve got just that I can count of people that I know, probably four or five breweries that are planning to open this year around the state. I know we here at Peace Tree are looking adding fermentors and adding capacity. I know a lot of my peers are doing the same thing and looking for ways to grow what they’re producing,” McKay says.

Nine-five percent of Iowa’s craft breweries are locally owned. A survey conducted as part of the study showed that 92 percent of craft breweries in Iowa sell their products at local events and festivals and nearly all said they were active members of their respective communities. For more information, visit www.iowawineandbeer.com

Photo and chart courtesy of the Iowa Wine and Beer Promotion Board.