You are here: Home / Fires/Accidents/Disasters / Walls fell ‘like dominoes’ in collapse of Evansdale building 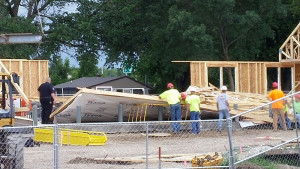 Two workers were injured when a convenience store that was under construction in a Waterloo suburb collapsed Wednesday afternoon.

Evansdale Police Chief Jeff Jensen says one of the men was trapped under the debris and suffered potentially serious injuries, but all were fortunate the situation wasn’t worse.

“When everything landed down, they had three of those hoists, the scissor hoist lifts and fortunately, all of the wood fell onto those so it didn’t crush the guy underneath,” Chief Jensen says. “It’s a very, very lucky situation.”

Jeff Kobliska, a mechanic who was working at an auto repair shop across the street, saw the building collapse and describes the scene.

“I heard timber crackling, boards breaking, and I looked out the overhead door and seen all the rafters falling like dominoes, just one right after the other,” Kobliska says. “Guys in bright yellow shirts were flying in the air and falling and guys were yelling.”

The cause of the collapse remains under investigation. Authorities have not released the names of the injured men.