You are here: Home / Education / An exit interview with University of Iowa president Sally Mason 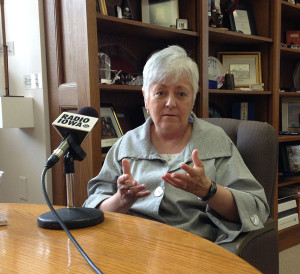 Flood waters and fluctuating finances are among the challenges University of Iowa president Sally Mason has confronted on the Iowa City campus over the past eight years.

“Obviously I’ve had an interesting tenure and it started with a combination double-whammy of nature disaster and then huge recession,” Mason said a week ago.

Mason granted Radio Iowa an hour-long interview to talk about her tenure at the university as she prepares to retire August 1. The student union which was heavily damaged by the 2008 floods has recently reopened and next year other key campus buildings will reopen.

Mason said flood recovery has taken that long because the university had to ensure it followed Federal Emergency Management Agency guidelines. “We had to be very careful that we followed all the rules because we can’t afford on our own to do these projects. We need that help from the federal government in this particular case and we’re grateful for it,” Mason said. “You know as I look at these projects going up now I think of FEMA as a good partner. I have to say that going through it and getting to this point was challenging.”

The university’s Museum of Art had to be financed with private donations and it won’t be done for another 2 years. University officials estimate over 2 million square feet of building space on the campus was inundated with flood waters seven years ago, causing a billion dollars in damage.

“That was a bad one,” Mason said. “I don’t think people appreciate how bad it really was, but certainly at one time the floods in eastern Iowa were among the worst that this country had ever seen.”

Since 2008, flood waters have threatened the campus twice and the Iowa River is swelling from recent rains.

“But we’ve done such a good job of being able to protect the campus because we learned so much,” Mason said. “Now that most of the buildings will be fully flood-protected going forward, there’s a lot less that we would have to do for the ‘minor’ floods.”

Mason had to deal with a 10 percent across-the-board cut in state funds in 2009 and with ever-increasing reluctance from Republican legislators to boost state support of the university. Mason told Radio Iowa “diversification” has been important, as the university has aggressively sought outside financing for research and private donations for scholarships to supplement its allotment of state tax dollars.

“Do I think this state or for that matter all states could support public higher education better? They could, but again the competing forces out there that are all vying, with good reason, for the resources that are available, that’s tough,” Mason said. “So for those of us that can kind of sail on our own, we should do that.”

The University of Iowa’s annual budget when Mason arrived in 2007 was $2.6 billion. This year it’s about $3.7 billion.

Last year Mason sparked some controversy on campus with comments she made about sexual assault. Last week, Mason said administrators on “every college campus” are wrestling with these issues. Mason considers her “smartest move” was placing a campus sexual misconduct officer on her leadership team.

“Ideally we want to eradicate this behavior and it’s going to take a lot of hard work,” Mason said. “I give our students, now, a lot of credit…to help the campus both understand the issues and deal with them.”

Mason has been working without an employment contract since her initial contract with the board that governs the university expired three years ago. Mason said she’s “absolutely” leaving on her own terms. She told the Board of Regents chairman in December she was turning 65 in May and thinking of retiring.

“The opportunity to kind of say, ‘I’m going to do it and this is how I’d like to do it,’ and their willingness to say, ‘Yes,’ to it was gratifying,” Mason said.

If it weren’t for some coaching from colleagues more than four decades ago, though, Mason may not have gotten on the administrative track that ultimately led her to serve as president of the University of Iowa for the past eight years. Mason spent two decades at the University of Kansas — and thought she’d stay in Lawrence forever.

“But sometimes opportunities come along and you really then have to make some decisions,” Mason said. “…Of the three moves that I made, I moved with the intention that it would be my last move.”

Mason left Kansas, where she was the dean of the college of arts and sciences, to become provost at Purdue, where she had earned her master’s degree in the early 1970s.

“When I was a graduate student at Purdue in 1972 it was not a great place for women at all,” Mason said. “….As new graduate students were coming into Purdue University that year in the biology department, the young women — and there were 20 or 25 of us — we were taken aside by a single advisor. He told each of us individually the only reason we were there was the fear that they had of losing their federal funding with the new Title IX guideline and none of us knew what Title IX was at the time, so we had no idea what they were talking about other than we really weren’t welcome there.”

Title IX is a federal law that prohibits gender discrimination in any federally-funded education program. After six years as provost at Purdue, Mason was “tempted” by the opening at the University of Iowa.

“And the more I learned about Iowa, the more I could see that certainly given my experience at Kansas which has a very similar profile to the University of Iowa in some ways, that my background was pretty well suited for the experience at Iowa,” Mason said during the Radio Iowa interview, which was conducted in her university office. “And here I am.”

Mason, who is a biologist, knew the university’s reputation in science, but Mason said she didn’t “fully appreciate” the arts and music programs in Iowa City until she arrived — and she’s “really enjoyed” that aspect of the university.

“I’ve always been sort of a closet arts and crafts person,” Mason said. “If my father hadn’t insisted that if I was going to go to college I do something that might lead to a job, so I did science because I loved science, too, I would have probably tried to become an artist of some sort.”

Mason is the first child in her family to get a college education. Mason will become “president emeritus” of the University of Iowa in August and she has the option of returning to the classroom in the fall of 2016, but that’s doubtful.

“Well, I’m retiring!” Mason said, with a laugh. “I think a year from now retirement may have caught on.”

Mason and her husband own a home in Hilton Head, South Carolina, and they’ll move their belongings there next month. She plans to return to Iowa City periodically over the next 12 months to consult with the university’s new leader and she will help the University of Iowa Foundation complete key fundraising projects.

Mason will continue serving on several national boards, including the Association of Public and Land-grant Universities, the American Council on Education and the Universities Research Association.