You are here: Home / News / Beach hours at Lake Macbride changed after problems 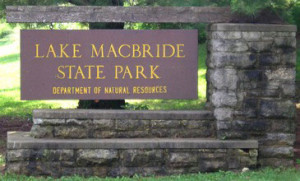 The Department of Natural Resources has made some changes at a state park beach in eastern Iowa in an effort to curb some recent problems. The DNR has changed the hours at Lake Macbride State Park beach in Johnson County, closing the beach at 6:00 p.m. rather than 10:30 p.m.

Officials say they’ve responded to some large fights at the beach this month and they believe the fights and other rowdy activity are fueled by alcohol use. Lake Macbride State Park Ranger Gwen Prentice told KCRG-TV, in addition to the reduced hours, the beach will be monitored more closely by law enforcement officers.

“We have park rangers from other state parks that are going to be coming in and helping out with presence here and enforcement here at the beach,” Prentice said. Lake Macbride is the only public beach in Johnson County that allows the consumption of alcohol. The DNR reported the fights at the beach earlier this month occurred later at night.

Solon City Administrator Cami Rasmussen believes the earlier closing time will make the beach a better place for families. “Basically what I’ve seen, on a personal level, as the day goes on, the later in the day the atmosphere changes, it gets rowdier, it gets louder,”

Rasmussen told KCRG. Frequent beachgoers, like Angi Anderson-Green of Solon, are getting used to the new closing time.

“It’s kind of hard for us,” Anderson-Green said. “We did want to come out here later on Father’s Day, so it being closed at 6:00 was a little surprising.”

The time change is also in effect at the Pleasant Creek State Recreation Area beach in Palo. Park officials point out that the early closing time is only for the beach areas of the state parks.