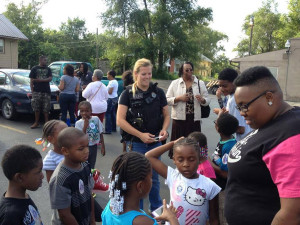 A fundraiser is planned this weekend to benefit the family of the Omaha police officer who was killed last month. The first female police officer to die in the line of duty in Omaha history, 29-year-old Kerrie Orozco was fatally shot May 20th while serving an arrest warrant.

The suspect was also killed. Officer Orozco was a Walnut, Iowa, native and a resident of Council Bluffs. Her partner of two years was Officer Kevin Wiese who says Orozco was one in a million.

“I loved working with her because she could talk with people,” Wiese says. “She had that ability to connect with anybody so when we did get into hairy situations, she could calm people down instead of amping things up. It was really nice, as her partner, because it kept things safe for us and for the people we were dealing with. Everybody who knew her knew she had a heart of gold. I really miss Kerrie a lot.”

She left behind a husband, two stepchildren and a newborn baby girl. That new daughter, Olivia, was born several months premature in February and was due to come home from the hospital the day after Orozco was killed. Wiese says he can only imagine the heartache felt by Orozco’s husband.

“I know Hector is a Christian man and he’s been working through things and he’s a solid, solid, solid guy and his faith is solid as well,” Wiese says. “It’s helped but it’s not easy, working through something like this. We’re just trying to make everything else as easy on him as possible.”

The Omaha Police Officers’ Association is holding a “Kerrie On” benefit for the Orozco family on Sunday. There are several bands playing, there will be live and silent auctions, raffles, kids’ activities, food, a community fair, a 3-K walk and 5-K run. All proceeds will benefit Officer Orozco’s family.

“We also have booths set up for the things Kerrie was passionate about,” Wiese says. “Special Olympics will be there, the Boys and Girls Club and our baseball team will show up, Girls Incorporated, Teammates mentoring program. We want to give people an opportunity to learn about the things Kerrie was passionate about, how she was involved and hopefully inspire others to get involved like she was.”

The event will be held at Ralston Arena in Omaha on Sunday from 11 a.m. to 7 p.m.