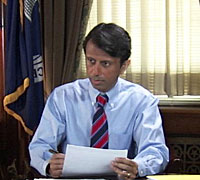 “I think as conservatives we need to stand up for our principles,” Jindal told Radio Iowa this morning. “Let’s do something new. Let’s endorse our own beliefs. You know, for too long conservatives have tried to hide our beliefs, try to make the left and the media like us and it doesn’t work.”

Jindal said President Obama and Hillary Clinton have led the country down the wrong path economically, internationally and culturally.

Jindal accuses the Obama Administration of being more interested in waging war on trans fat than on “naming” and defeating radical Islamic terrorists. And Jindal said, domestically, the Affordable Care Act is a bad law that needs to be repealed and replaced with market-based alternatives.

Listen to Jindal’s interview with Radio Iowa. First question: what are your thoughts about the pending US Supreme Court decision on same-sex marriage?

Jindal plans to stop at The Machine Shed restaurant in Urbandale later this morning to greet potential voters there.

Photo courtesy of the Jindal campaign.