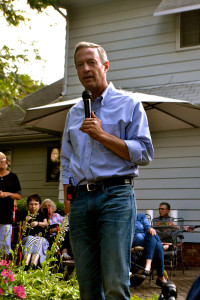 Democratic presidential candidate Martin O’Malley told an audience in Ames tonight that he is a “fearless” progressive — and the country’s embracing those values.

“If you ever doubt whether or not our country’s headed to a more compassionate, a more generous, a more loving place, this was a good week to see that in the United States of America, wasn’t it?” O’Malley asked and the crowd of about 120 Story County Democrats applauded.

O’Malley was Maryland’s governor in early 2012 when he signed a law that would legalize same-sex marriage and that November Maryland voters became the first state in the country to ratify marriage rights for same-sex couples. O’Malley was in Washington, D.C. last Friday when the U.S. Supreme Court issued its ruling on same-sex marriage.

“Who would have thought in just one week the Supreme Court of the United States became more progressive than every single candidate running for the Republican nomination for president,” O’Malley said, to more applause.

O’Malley said the majority of Americans are rejecting the “politics of exclusion” on a variety of issues. 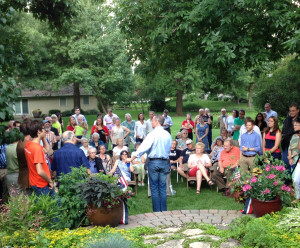 “If you talk to young people under 40 as I have across the country, you will rarely talk to young Americans who want to blame immigrants for our problems or who deny that climate change is real or who want to discriminate against gay couples,” O’Malley said. “That’s the future of our country.”

A “super PAC” organized to benefit O’Malley is running an ad criticizing rival Bernie Sanders for Sanders’ vote against background checks for gun purchases and legal protections for gun manufacturers. O’Malley told reporters tonight that he has “always been clear” on where he stands on “gun control and O’Malley contends the “emerging position” in the country on guns is similar to laws he enacted as Maryland’s governor

“I have been able to bring people together to pass comprehensive gun safety legislation, while also respecting the rights of hunters and hunting traditions which are really, really important in my state nad throughout the country, but we passed an assault weapons ban,” O’Malley said. “We passed background checks with fingerprints and we also were able to limit those magazines that can do so much damage.”

Sanders has said he favors “common-sense” legislation that bridges the “cultural divide” between rural Americans who favor gun rights and urban Americans who favor new restrictions on guns. Both Sanders and O’Malley will be back in Iowa later this week