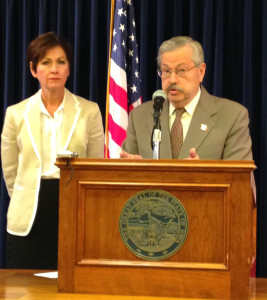 Governor Terry Branstad today said as he makes a final decision on state funding for K-through-12 public schools, he’s hoping to make a choice that will do the least damage.

“We’d prefer to have it: ‘Which is the best?'” Branstad said during his weekly news conference. “But sometimes that’s not the case and you have to determine which would do the most harm choose the path that you’d think would be the more appropriate under those circumstance.”

The compromise that cleared the legislature early this month would provide a one-and-a-quarter percent increase in general state aid for schools, plus a one-time funding boost of nearly $56 million. Branstad has said he is philosophically opposed to “one-time” funding.

“You have to balance the good and the bad,” Branstad said today, “and sometimes maybe you’ve got a situation where you think certainly this is not the right policy, but failing to approve it may create a worse situation.”