You are here: Home / News / Population of trumpeter swans continues to increase 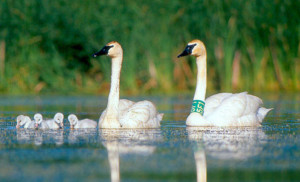 Trumpeter swans disappeared from Iowa’s waterways and skies more than a century ago when 1800s-era pioneers shot them because they were worried the big white birds would eat their crops. Since then, the majestic swans have been reintroduced to the state.

Wildlife technician Dave Hoffman, at the Iowa Department of Natural Resources, says the numbers have been slowly increasing over the past two decades. Hoffman says, “The cool part is that the volunteers are responsible for bringing the trumpeters back to Iowa with our first swans released in 1995 and the very first nest was in ’98.”

Hoffman says an important part of the restoration effort is to count the birds, so the U.S. Fish and Wildlife Service is asking for volunteers to report any swan sightings. Survey forms can be found on the Iowa DNR’s website. Hoffman says the survey, conducted once every five years, helps track the bird’s habits.

“Especially any nesting swans, especially with any young swans, called cygnets, and also the number of young cygnets that fledge or fly into the fall as well,” Hoffman says, “and then we also keep track of the number that are wintering and coming into the state each fall and winter as well.” Hoffman says there were 46 trumpeter swan nests recorded across the state last year.