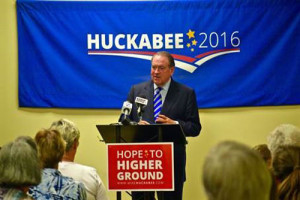 “There will be no persecution or prosecution of those who wish to exercise the restraints and the deep felt convictions of their conscience and that this will be protected,” Huckabee said early this evening.

Huckabee has been a vocal critic of last Friday’s U.S. Supreme Court decision which legalized same-sex marriage in all 50 states. Huckabee said, as president, he’d ask his attorney general to “vigorously protect the religious liberty” of Americans who oppose same-sex marriage.

“And not allow discrimination and bigotry to be applied toward those who have a conscience and who have convictions,” said Huckabee, the former Arkansas governor who is also a former Baptist minister.

During a question-and-answer session with reporters, Huckabee was asked why his proposed executive orders weren’t similar to President Obama’s controversial executive orders which have tabled deportation of undocumented immigrants who were brought into the U.S. as a child.

Huckabee said the courts “simply don’t have the authority” to redefine marriage and he has suggested the U.S. Supreme Court’s chief justice “needs medication for schizophrenia” — a remark that drew criticism from the National Alliance on Mentally Illness. Huckabee briefly joked about the controversy tonight during remarks to a group of supporters gathered for the opening of his Iowa campaign headquarters in Urbandale.

“Sure, I’m going to be the one that will say the outrageous things that will get me in trouble and make you question your sanity for having signed up to help,” Huckabee joked.

Later, Huckabee told reporters it’s “easy to offend people” and he was simply trying to find a way to describe the divergent reasoning Justice Roberts offered in last week’s rulings on ObamaCare and same-sex marriage.

“I’ll be honest with you, if I were as bland and as colorless as some people would probably hope a candidate to be, you guys would have nothing to ever talk about,” Huckabee told the group of reporters, photographers and video camera operators surrounding him. “I mean I would give you nothing, so you’ve got to give me a little love here and realize that it is in the best interest of the public to have candidates who speak clearly and vividly and colorfully — not to offend, but to illustrate.”

Huckabee, who plans to campaign in each of Iowa’s 99 counties before the February 1st Iowa Caucuses, will hold town-hall meetings Wednesday in Council Bluffs, Sioux City and Cherokee. On Thursday he’ll hold meetings in Fort Dodge, Dubuque and Burlington.