You are here: Home / Fires/Accidents/Disasters / Smoke from Canadian wildfires give sun a new look 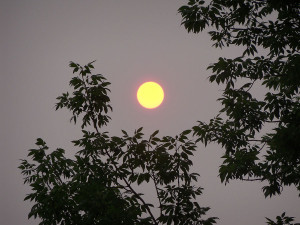 Sunsets have a golden hue caused by smoke from Canadian fires.

You may have noticed the sun was a strange color this morning and on Monday. You can blame Canada.

The afternoon sun had a sort of golden-yellow hue and the sunset was spectacular. National Weather Service meteorologist Craig Cogil says it’s due to smoke from at least 40 wildfires in the Canadian province of Saskatchewan, fires sparked by lightning.

“We’re seeing Canadian wildfires producing quite a bit of smoke and that smoke is moving southeast into the Midwestern part of the United States and causing some obscuration of the sun during the afternoon and evening hours,” Cogil says, “and also the moon during the overnight was a dusky orange.”

Cogil says Iowans will likely see the sun through the smoky filter for a bit longer. “It does look like we may continue to see this smoke down across us during the day today as we see the upper flow continue from the northwest out of Canada,” he says. If you have asthma or other breathing issues, the smoke shouldn’t bring you any trouble. “Most of the smoke is in the upper levels of the atmosphere, not really down near the surface, so it doesn’t appear so at this time,” he says.