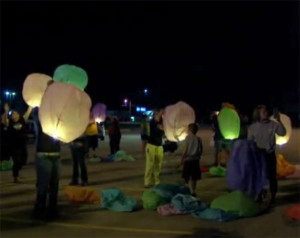 The state-run Mental Health Institutes in Clarinda and Mount Pleasant were officially shut down last night as the fiscal year came to an end.

Governor Terry Branstad has led the charge to close the facilities and shift to community-based mental health services.

Former employees at the Mount Pleasant MHI released floating luminaries as the final employee clocked out just before midnight. Anna Short, a former drug abuse counselor at the facility, told KCRG-TV the event made the closing “real” both for her and her former co-workers.

“It’s done and it’s sad,” Short said. “It’s not just co-workers, it’s your family.” Workers moved the final patients out of the Mount Pleasant MHI late last week. All of the workers, in both Mount Pleasant and Clarinda, have been laid off. The state legislature approved a budget that would keep the MHIs open for up to another year, but the governor is expected to veto that part of the budget.

Monday is the final day for the governor to make decisions about funding bills legislators sent to his desk. Danny Homan, the head of the union that represents the largest share of state employees, has said he believes Governor Branstad’s actions are in violation of state law and the collective bargaining agreement. It’s anticipated that AFSCME Iowa Council 61 will be part of a lawsuit challenging the governor’s call to shutdown the two MHIs.

“Last night, at midnight, the Mt. Pleasant and Clarinda Mental Health Institutes closed their doors and the entire staff was laid off. This is a sad moment for the people of Iowa, especially those patients and families that need the services provided by these two facilities. The real losers here are the patients and the citizens of the state of Iowa. Residents of southern Iowa no longer have these two excellent facilities as an option for the care of their loved ones facing mental health challenges. Iowa’s mental health safety net has been made weaker by the choices the governor has made. To the employees of these facilities, who have provided excellent treatment to patients for many years, I’m very sorry the governor has decided to take this action. I believe not only has he violated the collective bargaining agreement by his actions of laying everyone off effective at the end of June, but I also believe he is in violation of a state law and we will take the appropriate action and attempt to fix this situation. The governor has chosen to ignore the advice of patients, their families, mental health professionals, legislators, employees, and community leaders. He should be ashamed of the decision he made to shut down these facilities.