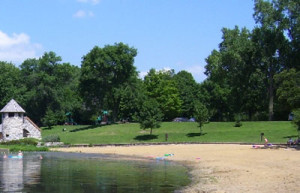 The weekly tests of the water near 10 state park beach areas showed high levels of bacteria last week — the most since the second week of testing when there were 13.

The DNR’s Mary Skopec says all the rainfall is the biggest factor. “We’ve had several pretty intense rainstorms come through the state, so it is typical for this early in the season to have a number of beach advisories,” Skopec says. “But I think as we move through into the drier part of the summer, hopefully some of those advisories will go away.”

Skopec says sunshine is the cleanser that clears the bacteria out. “The increase in the bacteria really depends on the lake, but generally within one to two days the numbers come down. Especially if we gave sunny calm weather, the bacteria drop out and numbers get a lot better,” Skopec says. Many lake levels are up right now after the rains — which can also lead to an increase in bacteria.

“The high water levels can have an impact. We do know that the near beach areas, the beach sands can actually be a source of bacteria,” Skopec says. “Goose droppings on the beach for example, can be washed into the lake. And so when those lake levels are higher because of high levels of rainfall or flooding — we do get some of that — geese droppings moving into the lake area. So, it will be a problem for awhile.”

Beaches with high levels of bacteria have green signs posted on them.