You are here: Home / News / June comes in as 22nd wettest on record 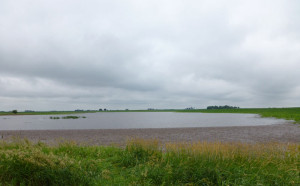 The just-ended month of June was the 10th wettest June on record for Des Moines, with records dating back 136 years, while for the state overall, it was the 22nd wettest June.

State climatologist Harry Hillaker says the statewide average for rainfall was just slightly above normal at 6.5 inches, but a few sections of the state saw radical departures.

“Some areas, especially far northwest Iowa, places like Sheldon, Sioux Center, Orange City, only got about half the normal amount of rain, roughly 2.5 inches of rain, to some very hefty totals across the southern half of Iowa, the biggest total I’ve found was in Dallas County at Waukee where they had about 13.5 inches of rain.” He notes, half of that rain in Waukee fell just in one day.

June was also a month of temperature extremes, with some chilly days balanced out by steamy ones. “Overall, the average was just a little bit warmer than normal, about one half of one degree above normal, so about as close to normal as we ever get,” Hillaker says. “The most recent week and a half or so has been more consistently on the cool side of normal but that was canceled out by the relatively warm and humid weather we had earlier in the month.”

Gazing ahead, Hillaker says July may hold more rain and less heat. “The best guess is a month that would average a little bit wetter, a little bit cooler than usual,” he says. “That’s what the National Weather Service is indicating for the coming month. Even on the relatively short term, that looks to be what we’re getting.”

It’s still unknown how the smoke now wafting over Iowa from Canadian wildfires may negatively impact temperatures, as skies are consistently hazy day-and-night.