You are here: Home / News / New poll shows Walker ahead, with six-pack of candidates close behind 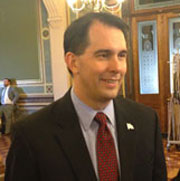 “The race for Iowa’s Republican Caucus is one big muddled situation,” Peter Brown, assistant director of the Quinnipiac University Poll told reporters in Des Moines this morning. “…It’s simple math. With 16 candidates, it’s hard to find anybody who can move far away from the pack.”

Walker got the support of 18 percent of those polled. Among those “jostling” for second place: Donald Trump, Ben Carson, Rand Paul, Ted Cruz, Jeb Bush and Marco Rubio. Mike Huckabee is the only other candidate to get at least five percent support.

“No one has a clear lead,” Brown said. “In first place is Scott Walker, the governor of Wisconsin who’s a neighbor and he scores the best, but his numbers are decreasing.”

The Quinnipiac Poll taken in Iowa back in late February found Walker had 25 percent support and another Quinnipiac Poll in May showed Walker at 21 percent. He’s three percent below that in the latest poll.

“A half dozen candidates are essentially tied for second place right around nine or 10 percent, so it’s really have to see a clear trend,” Brown said. “Making it more difficult is the sheer size of the field.”

There are currently 14 “official” candidates in the race. The latest entrant — New Jersey Governor Chris Christie — got one percent support in the poll. Christie has high negatives, too, according to Brown, but the leader in the unfavorable rating category is Donald Trump.

“He gets 10 percent of the vote in terms of people’s first choice, but he is far and away the leader when voters are asked to say who they could never vote for,” Brown said.

Twenty-eight percent of those polled said there’s “no way” they’ll vote for Trump. Nearly half of those polled said being honest and trustworthy are the most important characteristics in a president. About a third are mostly looking for a candidate with strong leadership skills.