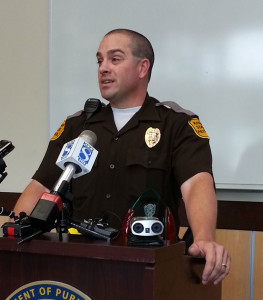 An Iowa State Patrol trooper was recognized today for his efforts over the past two decades in getting drivers under the influence of drugs off of roadways. The chief of the Governor’s Traffic Safety Bureau, Patrick Hoye says Trooper Marc Griggs has completed more than 500 drug evaluations.

“Since the inception of the program in Iowa, our records indicate that he is the first officer to reach this impressive plateau,” Hoye said. Griggs, one of 125 certified Drug Recognition Experts (DRE) in Iowa, is a 22-year veteran of the Iowa State Patrol.

“Anytime we do take an impaired driver off the road — whether it be drugs or alcohol — we have saved a life,” Griggs said. According to Hoye, 30-percent of traffic fatalities in Iowa involve impaired drivers. Griggs said as he began his career with the patrol in the late 1990s, he knew many of the drunk drivers he encountered were possibly under the influence of drugs. But, at the time, law enforcement officers were not trained to assess a motorist for “drugged” driving.

Now, officers can receiver specialized training to determine if a driver might be under the influence of illegal or even legal drugs that might pose a threat to highway safety. “So, that is helping to get the word out that drugs and alcohol don’t mix…or strictly drugs cause impairment also,” Griggs said.

In 2014, according to the state Department of Public Safety, there were 47 drug-related traffic fatalities in Iowa. The 43-year-old Griggs lives in Ankeny with his wife and two children. He’s a native of Harcourt in Webster County.