You are here: Home / News / Sanders says he has a ‘strong chance of winning Iowa’ (AUDIO) 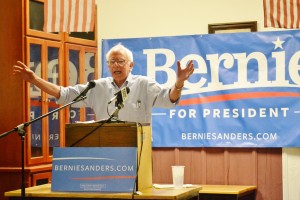 Democratic presidential candidate Bernie Sanders spent the first half of this Friday campaigning in Republican-leaning northwest Iowa. A crowd of over 200 greeted him for an early morning event in Sheldon and about 150 people crowded into the Better Day Cafe in Storm Lake to see Sanders over the noon-hour.

“The reason that we’re going around the state and into small towns is we understand the Caucus process and the votes here are as important as they are in Des Moines,” Sanders told reporters after his appearance in Storm Lake. “So we think we are putting together a strong infrastructure which is going to give us a strong chance of winning Iowa.”

A recent Quinnipiac University Poll found Sanders’ support in Iowa has more than doubled since May, to 33 percent of the likely Iowa Caucus-goers surveyed. Sanders, a self-described democratic socialist, a Vermont senator and the longest-serving independent in congress, said late last year he would not run for the Democratic Party’s 2016 presidetial nomination unless he sensed a “grassroots revolution” — and Sanders declared as he was leaving Storm Lake that it’s happening.

“People are resonating to the message, that there’s something fundamentally wrong with economics and politics in America,” Sanders told reporters.

Brian Gerjets of Cherokee, a truck driver who is co-chair of Cherokee Democratic Party, saw Sanders in Sheldon and Storm Lake. He said Sanders is delivering a “common sense” message.

“Wake up people. Look around. Everything he’s telling you is the truth,” Gerjets said. “The billionaires are running this world. Whether Bernie can take it all the way to the end, that’s questionable.”

Lynn McMullen and his wife, Paula, run an antiques and woodworking store in nearby Fonda and they’re going to vote for Sanders in the Caucuses.

“He’s right on the issues as far as getting rid of Citizens United for one and also for single payer health care,” Paula McMullen said.

Lynn McMullen added: “It’s boiled down to wealthy elements and corporate people just buying the government. It’s not a democracy any more and we need to turn that around or it’s all over.”

Sanders answered questions for 15 minutes after delivering a 50-minute speech in Storm Lake. He praised President Obama’s move this past week to change the rules for overtime pay and repeated his call for 12-weeks of paid family and medical leave, as well as mandatory vacation for working Americans.

Two other presidential candidates are campaigning in the state today. Former Maryland Governor Martin O’Malley, a Democrat, stopped at the site of a wind turbine this morning in Ankeny to highlight his ideas for boosting renewable energy. This afternoon, Louisiana Bobby Jindal, a Republican, is touring a fire arms manufacturer in Sheldon then stopping in Spencer.