You are here: Home / Health / Medicine / Firefighter ‘overwhelmed’ with support as he battles cancer 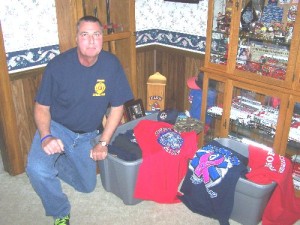 A retired firefighter in northwest Iowa is collecting t-shirts from fire departments across the country as he battles cancer and recovers from heart surgery. Doug Harms retired from the Le Mars Fire Department last year due to health issues related to his heart. Since that time, he has also been diagnosed as having cancer in his neck and throat.

Harms’ girlfriend had the idea to spread a message on Facebook asking for the t-shirts as a way to help boost Harms’ morale. As of this week, he’d received around 150 shirts from departments across the state and country. “We’d like to get one from every state and as of right now, we’re 26 states short,” Harms said.

Harms served with the Le Mars Fire Department for 27 years and was promoted to the rank of Captain before his health issues forced him into retirement. Following the heart surgery last year, Harms was diagnosed with cancer. “I got all healed up from (the surgery) and thought if I exercise and stuff I can get back on the fire service, well then, I had a physical and they found a mass in my neck,” Harms said.

This past Sunday, a benefit auction organized by his siblings was held in Le Mars and more than $10,000 was raised to help with Harms’ medical bills. “I can’t thank people enough for the donations…it was overwhelming,” Harms said.

The Le Mars Fire Department is planning to hold a benefit for Harms on July 22. Harms receives both chemotherapy and radiation for his cancer. His doctors are hopeful that Harms will one day be cancer free and make a full recovery.
by Dennis Morrice, KLEM