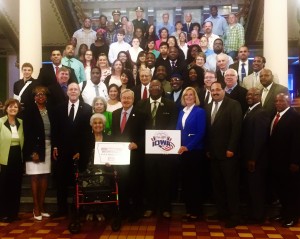 Iowa Republicans like Governor Terry Branstad are joining with Iowa Democrats to urge presidential candidates to participate in an event sponsored by the Iowa Brown and Black Forum.

“For the first time, the Republican Party of Iowa is joining the Democratic Party in hosting this ‘Brown and Black Forum’ for our candidates,” Branstad says. “This is a great bipartisan effort to maintain Iowa’s leadership position in the nation.” The Iowa Brown and Black Forum has hosted debates featuring Democratic presidential candidates since the 1984 campaign, but Republicans are proposing a forum for their candidates, too, in early December. Wayne Ford of Des Moines, a former state legislator, is a co-founder of the group, and he’s celebrating the move by Iowa Republicans.

“Black and brown, Republicans and Democrats — we do work together,” Ford says.

Critics of the Iowa Caucuses say the state’s voters are predominantly white and issues of importance to minorities don’t get enough attention. Iowa Republican Party Chair Jeff Kaufmann says having GOP candidates attend the forum and speak directly to Iowa’s Latino and African American communities puts issues of concern to minorities at the forefront of the 2016 campaign conversation.

“This will help this particular state to be exactly where it needs to be – and that is leading the pack in this country,” Kaufmann says.

Andy McGuire, the chair of the Iowa Democratic Party, agrees.

“The issues facing minority communities will be front and center in the 2016 election,” McGuire says.

Officials from the two political parties along with Iowa Brown and Black Forum leaders held a statehouse news conference to announce the bipartisan effort this afternoon and Congressman Dave Loebsack — the only Democrat in Iowa’s congressional delegation — was there to tout the proposed candidate conversations.

“I think it’s an event that all Iowans can take pride in,” Loebsack says.

The Iowa Republican Party and the Brown and Black Forum plan to co-host an event for candidates on December 3rd at Drake University. It won’t be a debate and each of the candidates will be given an opportunity to speak individually to the crowd. The forum for Democratic candidates is scheduled for January 11th and will be held in Des Moines, too, but a location hasn’t been announced yet.