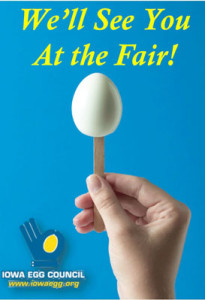 The bird flu outbreak won’t keep a fan favorite from the Iowa State Fair next month. The free egg-on-a-stick will still be available at the fair despite the aftermath of bird flu and soaring egg prices. Iowa Egg Council consumer affairs director, Katie Coyle, says it’s especially important to have the egg-on-a-stick this year.

“There’s a lot of consumer questions that are going on and we just want to show that we’re still here, we still have plenty of eggs for everyone, we’re not going anywhere, so that’s why we’re still continuing with our original plan,” Coyle says.

The avian flu forced Iowa producers to kill millions of laying hens, which has led to an increase in egg prices in stores. Coyle says the organization buys some of the eggs and others are donated by producers.

The Iowa Egg Council handed out more than 11,000 dozen hardboiled eggs-on-a-stick last year. “Eggs are the most affordable source of protein out there and they are still healthy, and nutritious and delicious,” Coyle says. “Egg-on-a-stick is just a hardboiled egg on a popsicle stick, cause everything at the fair is on a stick so why not eggs.” Coyle says the group expects to hand out as many free eggs as last year — nearly 137,000 — from their booth in the Agriculture Building.