You are here: Home / Fires/Accidents/Disasters / State numbers are down in the 3 prime tornado months 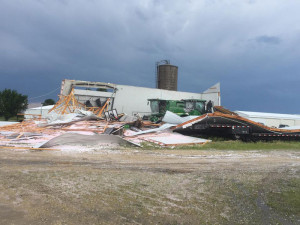 Tornadoes can strike during any month of the year but tornado season in Iowa is usually considered the three months of April, May and June.

Even though we’re now in July, the tornado count is very low. Meteorologist Kelsey Angle, at the National Weather Service, says there were fewer than 30 twisters during the just-ended season, but an official tally isn’t out yet.

“We are still working and assessing the number of tornadoes that have occurred,” Angle says. “We had a number of tornadoes during June. It looks like we’ve had over 20 across the state. Most of those have been on the weak side so that is some good news.” Last year was much more active as there were 55 tornadoes confirmed statewide.

“On average, we see 46 tornadoes in a year in Iowa and we still could see some more as we head into the rest of summer,” Angle says, “so undoubtedly, those numbers could be changing over the next few months.”

The numbers vary widely from year to year. In 2013, there were 28 tornadoes confirmed in Iowa, while the year before that, in 2012, there were only 16 tornadoes reported. Today’s thunderstorms dumped heavy rain on parts of Iowa but no twisters appeared.