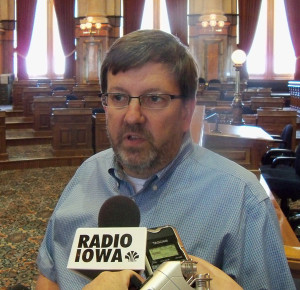 The top Democrats in the Iowa Senate say they are sending a letter to all 50 senators seeking a special session to override Governor Terry Branstad’s veto of one-time funding for the K-12 schools.

Senate Majority Leader Mike Gronstal, a Democrat from Council Bluffs, says he also hopes to get the votes needed from Republicans for a special session. “We’re certainly hopeful that there will be Republicans that when they talk with their local superintendents and teachers and parents and students that they will recognize this is not a good budget for K-12 education,” Gronstal says.

He says they also hope to address the veto of money for the Mental Health Institutes in Mount Pleasant and Clarinda. “We think they’ll be responsive to the concerns that come from their constituents. We also think those legislators that are from the Clarinda or Mount Pleasant area will certainly have some concerns about the closings of those two institutions and the reduction of acute mental health beds in the state of Iowa,” Gronstal says.

He was asked if Democrats will lobby Republican legislators to back the special session. “I would say it probably doesn’t matter a lot to the Republicans what the Democrats think inside the legislature, and at some level, the reverse is probably true,” Gronstal says. “But we think they may be more responsive to their local constituents. And across the board, across the state of Iowa, almost every major newspaper in the state has editorialized against the governor’s veto.”

It would take a two-thirds vote in both the House and Senate to have a special session. House Speaker Kraig Paulsen, a Republican from Hiawatha, doubts there’s enough votes . “I do not see a special session. I do not think there is the support to either have the special session — to call us back — or to veto override,” Paulsen says.

Paulsen told reporters today he has not talked with every House member, but has talked to enough to gauge the support for a special session. He says they will have to deal with the veto. “The governor vetoes stuff every year. I guess we make decisions and he makes decisions and we will come back in and address things next year,” Paulsen says.

Lawmakers approved a 1.25% increase in K-12 education money for the next school year, along with nearly $56 million in one-time money, which the governor vetoed. Prior to the veto, the governor had said he would consider calling legislators back in special session to set a second year of school spending that he had requested.

Paulsen was asked if they might agree to a special session in exchange for setting a second year of funding. “Actually that goes to really what my bigger frustration in this whole thing is — we should have had that resolved before we left this year,” Paulsen says. “This whole conversation about the special session really appears to me to be in particular the Senate Democrats, but Democrats in general, trying to play politics with K-12 education.”

Paulsen says they should have been able to work the school funding issue out. “The whole conversation should not have lasted that long this last session. House Republicans, we’ve tried multiple times to try to change the law so that it would actually work for the school districts and work for the General Assembly, and have something that actually requires us to act, as opposed to the law that is really hollow. And we wanted to resolve fiscal year 17,” Paulsen explains. “We were not able to do any of those things because, I think some of the political games that are going on.”

Gronstal says they worked hard to increase the funding to schools because they thought it was important, and they kept it up until they got a deal done on the one-time funding well after the legislature was scheduled to adjourn. “In the end, the House agreed with us that providing one-time revenues of almost $56 million would make some sense. I don’t think that was politics,” Gronstal says. “Had we been able to get that compromise on April 30, we would have taken it at that time. But at that point in time, but the House Republicans weren’t yet ready to go with that.”

Paulsen says there is some frustration among Republicans over the MHI closures, but he didn’t indicate he thought that was enough to sway them to seek a special session.