You are here: Home / Military / Vietnam War exhibit to open in Waterloo 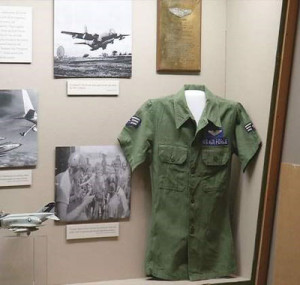 Part of the Vietnam exhibit in Waterloo.

An exhibit commemorating the 50th anniversary of the Vietnam War is scheduled to open in downtown Waterloo next week. Robin Venter, the exhibit curator, told KCRG-TV it’s important to give the Vietnam veterans the proper “welcome home” they deserve.

“We need to honor these veterans with the same type of honors that we gave people during World War II and Korea and other wars,” Venter said. “Tell them thank you and welcome them home and treat them with respect and dignity that they deserve.”

The exhibit, which opens at The Sullivan Brothers Iowa Veterans Museum on July 14, will include many artifacts and photographs. A timeline of dog tags identifying Iowa soldiers who were killed in action also will be displayed. A digital kiosk called “Faces to Go With Names” will show photos of those soldiers.

The display will remain in place for a year. The exhibit is free of charge for Vietnam-era veterans.