You are here: Home / News / Clinton tells reporters: ‘This is going to be competitive’ (AUDIO) 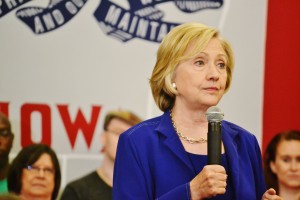 Democratic presidential candidate Hillary Clinton met with about 60 people in an Ottumwa home late yesterday afternoon, a “house party” event that has become a staple of her three-month-old campaign here.

“There will be plenty of time for huge events, for interviews, all of that,” Clinton said. “That comes with the territory as you get, in my view, closer to the caucuses, but until then it’s very important to me to know what’s on your minds.”

Clinton told the gathering in Ottumwa that a “shortcut” to solving some of the nation’s vexing problems is to elect more Democrats.

“I believe in helping you build back the party in Iowa,” Clinton said. “I heard a lot of county chairs are here. I want to have a coordinated partnership to rebuild the party in Iowa. It breaks my heart that Tom Harkin retires and we have one Democrat, Dave Loebsack, left in the congressional delegation.”

Clinton spoke for about half an hour, then took a couple of questions from the guests. Earlier Tuesday afternoon, Clinton was in Iowa City, speaking to a crowd of about 350 in a small meeting room at the public library. Dozens more were stranded outside in a line that stretched for two blocks. The last question from the crowd inside the library came from a woman who cited the case of a popular Iowa city pastor who was recently deported. Clinton made this vow: “I’m going to make this a big issue in the campaign. I’m going to talk about it like I talked about it here and I’ll talk about it everywhere because I want people who vote for me to know they’re voting for comprehensive immigration reform, because I want to be able to go to Washington and say: ‘I was elected to do this.'”

Clinton spent over half an hour shaking hands and posing for pictures with the Iowa City crowd, then she took questions from the media and she was asked about a recent poll which found support for rival Bernie Sanders had more than doubled, to about a third of likely Iowa Caucus goers.

AUDIO of first 7 minutes of Q&A with reporters in Iowa City.

Iowa’s Caucuses are scheduled for February 1, 2016. Clinton will return to Iowa next week, for an Iowa Democratic Party banquet. Bernie Sanders, Martin O’Malley and Jim Webb — her competitors for the Democratic Party’s 2016 presidential nomination — will be there as well.