You are here: Home / News / Rubio pressed to contrast his resume with Obama’s (AUDIO) 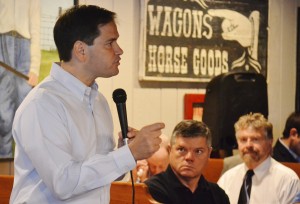 Republican presidential candidate Marco Rubio has been saying it’s time to “turn the page on the past” and embrace a new generation of leaders.

This morning during an appearance at the Westside Conservative Breakfast Club in Urbandale, the 44-year-old Rubio was asked by someone in the audience why he’s different from Barack Obama, who was a first-term U.S. Senator when he was elected president.

“I think there’s some significant difference between me and the occupant of the White House,” Rubio said, to lauhgter and applause.

Rubio said he “ran” Florida’s legislature as a Republican leader there and will have served a full term in the United States Senate, compared to the two years Obama served there.

“He has made the deliberate decision to tell people who are hurting in this country that the reason why they are struggling is that one of their fellow Americans are doing well and when you divide a nation against itself, it cannot rally to the great causes of its time.”

Rubio promised as president he’d be a “creative, innovative” and moral leader.

“And so these are major differences between me and the person who’s here now,” Rubio said. “And I hope you’ll see that in the weeks and months ahead.”

Audience members also asked about the federal debt and how Rubio would attract minority voters to the Republican Party. Over 200 were crowded into The Machine Shed restaurant to hear Rubio speak. Larry Hassmen of West Des Moines was among the first to shake Rubio’s hand.

“I told him that my son’s about his age and I go to my son for counseling,” Hassman said. “I think that’s what we need is new ideas and not just sit back in the old ways of either party, actually.”

Bob Seeley has seen a number of the GOP candidates in person and he’s impressed by Rubio.

“I think he’s one of the leaders,” Seeley said after hearing Rubio speak. “…I think he’s got a view for the future, so it’s nice to hear that. It’s refreshing.”

Rubio is campaigning in eastern Iowa for the remainder of the day. He’ll return to Iowa next week. He’s one of nine Republican presidential candidates who’ll speak at The Family Leader’s summit in Ames on Saturday the 18th.