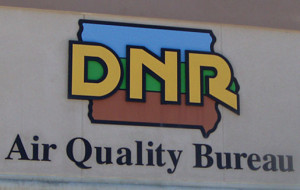 Representative of Iowa industries weighed in Wednesday on a proposal by the Iowa Department of Natural Resources to raise fees on companies which emit pollutants into the atmosphere each year.

The DNR proposes a new $24,000 application fee for operating permits, and companies would pay more each year per ton of emissions.

DNR Air Quality Bureau Chief, Catherine Fitzsimmons, says as Iowa industries have reduced emissions, they’ve paid lower fees. That means less money for the DNR to hire staff to approve operating permits, so there’s a backlog. “So, we are not currently meeting the federal requirements to issue those permits within 18 months of receiving a permit application,” Fitzsimmons explains.

Fitzsimmons says the increase in fees would allow them to speed up the process. “We have a backlog of 90 operating permit applications,” she says.

Kelly Jorgensen with Ag Processes Incorporated pushed back on some of the fee increases. “I think everybody’s concerned any time you have a change,” Jorgenson says. Rick Stevens with Archer Daniels Midland in Cedar Rapids says the new fees are unsustainable.

The fees cover companies which emit more than 100 tons of material into the atmosphere each year. As many as 4,000 Iowa companies would also pay a new fee for construction permits. The DNR’s Fitzsimmons says the higher fees are in the drafting stage and she urges more input from industry.