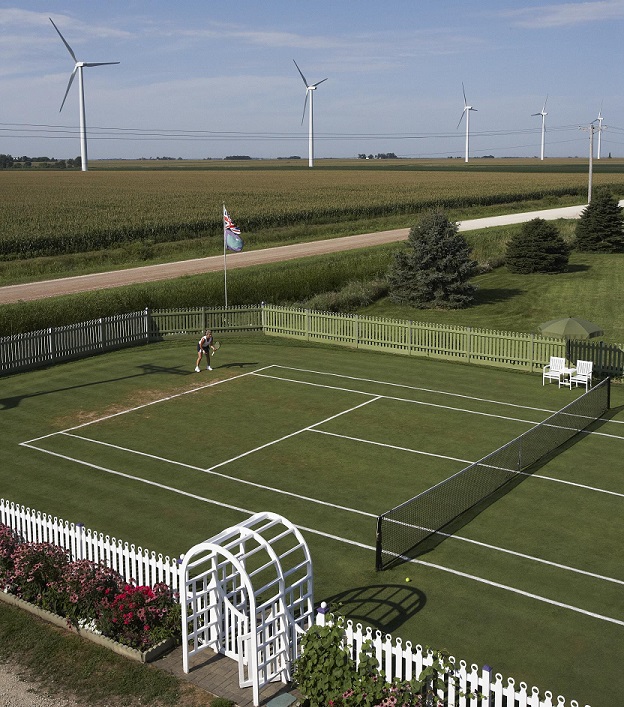 A farmer in northern Iowa who’s had a long love of tennis has created an accurate replica of center court at the All England Club in London where Wimbledon is now being played.

Mark Kuhn says the grass tennis court on his farm near Charles City is bordered by an immense corn field, much like baseball’s Field of Dreams in Dyersville.

The 9,000-square foot tennis court has special bentgrass that’s kept trimmed to a height of just three-eighths of an inch.

“It requires about an hour of maintenance every day,” Kuhn says. “You have to mow it and mark the lines, we do that every four or five days. We’ve acquired the exact same mower and line marking system that they use at Wimbledon. We try to keep it as authentic as we can but it’s just our replica of the world’s greatest tennis court.”

The 64-year-old Kuhn first had the idea for creating the tennis court when he was a boy doing chores on the family farm. Decades later, the farm became his own and he decided in 2002 to convert a cattle feed lot into the picket-fence-lined vision in green and white. Seventeen loads of sandy soil had to be trucked in and, in addition to the special grass, there are many detailed touches.

“There’s a flower garden planted around the side,” Kuhn says. “My wife and I like to maintain that and we have a strawberry patch over there. In season, we serve strawberries and cream to our guests.”

Back in 1960, Kuhn and his grandfather found the Wimbledon match on short-wave radio, when Kuhn was just ten years old and he became fascinated by the sport.

“We liked the British accent and the way the game was scored and all the Wimbledon tradition an I got interested in tennis,” Kuhn says. “I asked my mother to buy me a racquet and with some S&H Green Stamps, she got me a Spalding Pancho Gonzales and I’ve been playing tennis ever since.”

Over the past dozen or so years, he’s hosted players on the grass court from nearly 40 states and many foreign countries. Unlike the London version, the All Iowa Lawn Tennis Club charges no court fees and you don’t need a membership.

“I get a kick out of that as people do think it’s a club,” Kuhn says. “The idea was to be a whimsical replica of center court. There is one court on the farm, it’s in my yard. There’s no cost to play here, but you do have to have a reservation.”

After years of exchanging letters, Kuhn was invited to the real Wimbledon in 2012 to do an eight-day “internship” with the grounds crew prior to the championships, what he calls a dream come true.