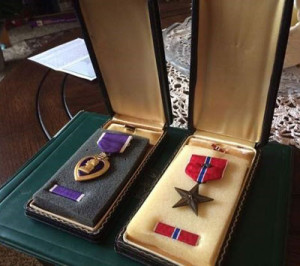 Harold “Gene” Miller received a purple heart and a bronze star during his service in the Vietnam War, but lost the medals years ago. Gene’s wife, Glenda, told KCRG-TV he never gave up on locating the medals, even as he battled an advanced form of cancer.

“It seemed like it was on his mind a lot at the hospital, knowing that he was going to pass,” Glenda said. “He slept a lot but when we did have the chance to talk, probably three or four different times, he’d bring up the medals.”

When Gene died in May, Glenda assumed she’d never find the missing medals. Then, she got a surprising phone call from Arizona. Two years ago, AnneMarie Putman discovered two medals in boxes her parents had packed away. Her mother and father are deceased, but both served in the Army.

Putman said the name on the certificates didn’t ring a bell, so she began a search for the owner. After two years of calling veterans groups, Army officials, and several lawmakers, Putman discovered Gene’s obituary online. She contacted Glenda through the funeral home, packaged up the medals, and shipped off the missing pieces of Gene’s past to the person who misses him most.

Glenda received the box Tuesday. “I grabbed the box, put it in my car and went up to Linwood Cemetery. I opened it with my husband because I wanted my husband to be there with me,” Glenda told KCRG. “I just wanted him to know we have them.”

Both women are unsure how the medals ended up in Arizona, but Putman said she still is going through boxes her parents left behind, hoping to uncover the connection between the two families.