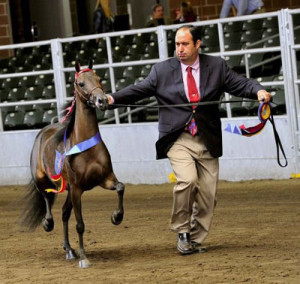 Small horses are a big deal in central Iowa this week as an international competition and show is underway that’s drawn participants from all over the globe.

Susan Galloway is spokeswoman for the American Shetland Pony Congress which is featuring more than 500 ponies at the Iowa State Fairgrounds in Des Moines.

“There are owners from New Zealand and Australia and we have a large Canadian representation,” Galloway says. “It’s an international organization. We have them from Florida, Texas, California, all over.”

The ponies are being put through paces in a series of tests, including harness, driving carts and roadsters, navigating an obstacle course and even a costume contest. There’s also a category called “liberty.”

“It’s kind of a test of a horse’s personality and gait and grace,” Galloway says. “They have a minute-and-a-half set to music that the horse runs and does a canter and a trot around the arena, then after the music stops, they have to — they say — ‘catch’ the horse, but many of the horses are so well trained that they stop and let the handler walk up and put the harness back on.”

This is the 69th anniversary for the Pony Congress. The very first show was held in Des Moines in 1947 during one of the largest fairs in the world — the Iowa State Fair. Competition started Tuesday and runs through Saturday at the fairgrounds’ Jacobson Exhibition Center. Admission is free.