You are here: Home / News / Algae blooms and bacteria found in testing at state beaches 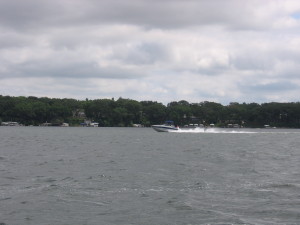 Some Iowa lakes are having issues with blue-green algae blooms. Mary Skopec oversees the DNR’s water monitoring program for state park beaches. “We advise people to use caution if they enter a lake that has a blue-green scum,” Skopec says. “Sometimes the looks like someone spilled paint on it, and there are thick mats of algae. If you see that, you should really avoid going into that water or letting your pets drink that water.”

Skopec says the algae releases dangerous toxins. “The toxins can affect the liver as well as the nervous system. In the most extreme they can cause respiratory distress. Often times we see issues with nausea or diarrhea, headache, that kind of thing,” according to Skopec. “So, it can make people quite ill — and it has in isolated cases caused pet deaths deaths, dog deaths around the state.” She says avoid drinking the water in those areas or putting your head under the water in those areas.

Some Iowa beaches also have signs posted for high-levels of bacteria this week: Backbone Lake, Denison Beach on Black Hawk Lake, Lake Geode, Lake Macbride, Pine Lake, and Union Grove Lake. While Iowa waters have issues with bacteria and algae blooms, a 14-year-old boy died this week after being infected by an amoeba after swimming in a Minnesota lake.

Skopec says the amoeba is not a major concern here. “At this point I wouldn’t be too worried about it, because it’s a very isolated condition,” Skopec says. She says the amoeba that causes the problem likes specific water conditions.

“The amoeba is really related to water temperature. And if the water temperatures are high enough, it is possible for them to end up in water in Iowa. The fact that it was found further north of us does present some challenges in terms of whether we might see that or not,” Skopec says. “Normally it likes those warmer temperatures and so I think we are learning more about where they might occur. But at this point I would say it is a very isolated incident in Minnesota, and people should avoid waters that are extremely warm,” she says. “A lot of times they occur where there is a warm spring, or extremely hot stagnant water. So, if they avoid that hot stagnant water, they should be okay.”

The amoeba enters the brain through the nose. Skopec says again, if you avoid drinking water with any of these issues and don’t put your head under the water, you should be okay. You can find out more about the beach water monitoring program at: www.iowadnr.gov.