You are here: Home / Human Interest / Billboards in Iowa are part of the ‘Why Islam?’ project 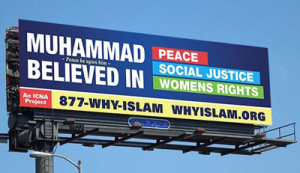 Iowa is among 14 states that are the focus of a campaign called the “Why Islam?” project. So far, four billboards have been placed in Iowa cities which organizers say aim to decrease hatred and mistrust and promote a peaceful coexistence. Imam Jawad Ahmed is the supervisor of the effort’s toll-free hotline, based in New Jersey.

“The whole purpose of this campaign is to give free information about Islam to all the Americans from their Muslim neighbors and to provide a free copy of the Quran so they can get the information directly from the source,” Imam Ahmed says. Along with an 800-number and a website address, one billboard says: “Muhammad believed in peace, social justice and womens rights.”

The billboard is placed along a main north-south corridor in Des Moines and it’s drawing plenty of attention. “We are getting a lot of calls from Iowa, much to our surprise,” Ahmed says. “We didn’t expect such a good response being one of the Midwest states in an area which is less known for Islam and Muslims, so we are happy to see the response from Iowans.”

What he calls “Islamaphobia” is still prevalent in some people and not all of the callers offer positive campaign critiques. “We’ve had a couple of calls where people are calling the hotline and venting their feelings out by going on a rant,” Ahmed says. “Others are calling just to inquire about Islam and Muslims and get to know them. Some have called us just to get a copy of the Quran.”

The campaign is not trying to convince anyone to convert and join the Muslim faith, he says, it’s only a tool for outreach.

“We don’t have any intention to convert people nor do we expect from this campaign that people should think about Islam from that perspective,” Ahmed says. “The only goal we have is that information is relayed to people and that they will have an unbiased impression about the religion itself.”

What’s known as the “Mother Mosque of America” is located in Cedar Rapids and is the longest-standing mosque in North America. There are also Islamic centers and mosques in Ames, Davenport, Des Moines and Iowa City. Islam has about seven-million followers in America, one-and-a-half billion worldwide.