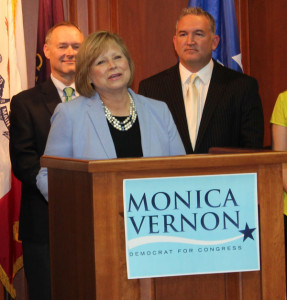 More top Iowa Democrats are lining up behind Monica Vernon’s bid for congress.

Cedar Rapids City Councilwoman Monica Vernon was the Democratic Party’s nominee for lieutenant governor last November. That was after she finished second in the June primary in the first congressional district, just behind Pat Murphy of Dubuque.

Vernon announced months ago she’d run again for congress. Murphy is thinking about a second bid for the seat.

Kevin McCarthy of Des Moines, the House Democratic Leader when Murphy was House Speaker, was there as well to endorse Vernon instead of Murphy. McCarthy praised Vernon for being a “team player.”

Iowa’s first district congressman, Republican Rod Blum of Dubuque, is in his first term, He won the seat last year despite the voter registration edge Democrat hold in the district and Democrats are hoping to field a strong, well-financed candidate to challenge Blum in 2016. One Democratic candidate who was in the race has dropped out already. The other announced Democratic candidate is Gary Kroeger, a former Saturday Night Live cast member who lives and works in Cedar Falls.

Photo from the Monica Vernon campaign.