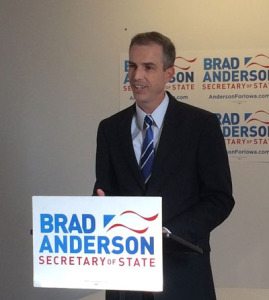 A group of prominent Democrats from Iowa and New Hampshire leave tomorrow for Israel.

“It’s going to be mostly an informational trip, but also a time to visit the sites and really get to learn about what’s going on in Israel and some of the issues they face,” said Brad Anderson, the Iowa campaign manager for President Obama in 2012 and an unsuccessful statewide Democratic candidate for Iowa Secretary of State in 2014.

The trip is sponsored by the American Israel Education Foundation.

“I am really, really excited to do it because I’ve never been to Israel,” Anderson said early this afternoon during an interview with Radio Iowa. “Obviously you read about it every day, but I’m really interested to learn from both perspectives.”

Anderson and the rest of the group will have a chance to meet with Israeli leaders as well as Palestinian leaders. This the 10th year the group has sponsored travel to the region and Anderson has talked with other Iowans who’ve been on this trip before. They tell him he’ll have a better understanding of how close everything is.

“You stand on a roof top and see Gaza and see the border and see exactly why the region is so hot and why the tension is so ripe,” Anderson said, “because everyone is right next to each other.”

The trip will last nine days. Others from Iowa who are making the trip:  Scott Brennan of Des Moines and Tyler Olson of Cedar Rapids, both of whom are former chairmen of the Iowa Democratic Party; State Representative Abby Finkenauer of Dubuque; Iowa Federation of Labor president Ken Sagar; Marcia Nichols, the Iowa political director for AFSCME; Heather Matson, a political consultant who has announced she’ll run for an Iowa House seat in the Ankeny area next year; Brenda Kole, a well-known political organizer who is working for Hillary Clinton’s Iowa campaign  and Chris Diebel, a political consultant who ran unsuccessfully for the Des Moines City Council two years ago.

(UPDATED at 2:24 p.m. with the addition of two more Democrats who’ll be making the trip.)